Girl to City: A Memoir 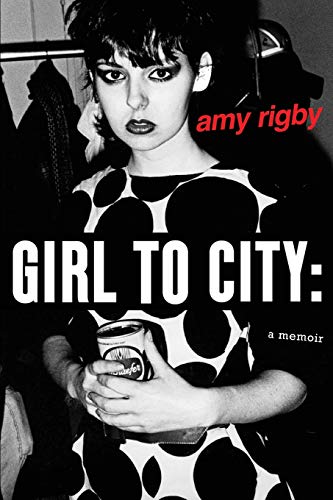 “an excellent read for any artist struggling to make their way and find their voice.”

At her first “real gig” with Last Roundup at the Peppermint Lounge in New York City in 1982, Amy Rigby contemplated the moment.

“I was already making a bid for relative obscurity at the same time as hoping that whatever musical venture I involved myself in would be hugely popular with the general public—some degree of delusion is a requirement in art or showbiz,” Rigby writes in Girl to City: A Memoir. “You have to believe in magic.”

The country-tinged Last Roundup was Amy’s first incarnation in the 1980s. Then came a decade or so with harmony happy The Shams in the 1990s. Ever since, she’s been a solo artist (seven albums) or collaborator with second husband, English punk pioneer Wreckless Eric (three additional albums). The New York Times has compared her work to Paul Simon’s and Randy Newman’s. In 1996, Spin magazine named her songwriter of the year.

For every musician on a stage, there is likely a hardscrabble story of sacrifice and determination. But it’s hard to imagine a more raw—and beautifully written—account than the one Amy Rigby serves up in Girl to City, which takes us up through the release of Diary of a Mod Housewife, her first solo effort, in 1996.

That album was praised by the Village Voice’s Robert Christgau as “Concept Album of the Year” for “thinking harder about marriage than a dozen Nashville homilizers.” Christgau noted Rigby’s lyrical focus on “structural underemployment”—and that is the precise beauty of Girl to City, which documents Rigby’s slow, frustrating climb to relative obscurity.

Rigby was raised “one river and one tunnel away” from downtown Pittsburgh. She considered it “nowhere.” Amy (then McMahon) was the only girl among four brothers. She grew up an Elton John fan, developed a talent for art, and skipped senior year of high school to attend Parsons School of Design in New York City. “It was 1976. Taxi Driver had just come out and the newspapers were full of tales or murders and garbage strikes. The famous Daily News headline ‘Ford to City: Drop Dead’ sealed the impression that Manhattan was a nasty, evil place that should be left to rot and finish itself off. I couldn’t wait to be part of it,” Rigby writes.

Soon, Rigby is hanging out at the legendary music clubs CBGB’s and Max’s Kansas City. She’s smack in the middle of the punk heyday—The Ramones, Television, The Dead Boys, Richard Hell, Blondie, Talking Heads, and Pere Ubu. She thrived in the incubators of punk. To her delight, “the old standards for judging musicians had changed,” particularly for women. Poly Styrene of X-Ray Spex smiled on stage—and flashed braces. “We were studying Dada at Parsons, but here was Dada onstage, in action. It was absurd, fashionable, made the audience uncomfortable and with that awkwardness came freedom.”

But how to make the transition from fan to stage? “I wasn’t sure what being an artist meant. What sort of magic had to happen to make those basic elements—ability, creativity, headstrong ambition to be somebody and do something—add up? When did you know you had enough to say to merit speaking? How could you make the words or sounds come out in a way that hadn’t been heard before?”

Amy has an intense affair with a married man (only known here as “The Manager”) that leads to a year in England. Back in New York, there are shady boyfriends, first attempts to learn guitar, temp jobs, hard choices to manage cash flow, hanging out with brother Michael as “inveterate scenesters,” worries about acne, unemployment checks, and a critical shift in Amy’s interests to southern writers (Carson McCullers, Flannery O’Donnor, Eudora Welty) and country music. “The details were rural, not urban,” she writes, “but the struggles felt familiar.”

Then, songwriting. “I’d get a character and a place in my head and inhabit the world of the song. I wasn’t in a fourth-floor walk-up on the edge of the East Village: I was in a truck stop diner, or a honky-tonk in Texas . . . It was like being an actor and writing the script at the same time.”

Soon Amy Rigby is on stage with Last Roundup playing the same clubs where she partied, and we follow Amy as she navigates music industry offers, learns the recording process, moves from Manhattan in search of cheaper digs, dives into her first marriage to dB’s drummer Will Rigby, and manages the challenge of raising a baby in the days when Brooklyn was hardly the hipster haven it is today. Amy takes us on the road with Last Roundup and The Shams (including one splashy tour with Urge Overkill) and through the lonely feelings of divorce. All along, there is the neverending evaluation of how much further there is to climb. Self-doubt cohabitates with inspiration.

“Writing songs gave me goals to aim for: make another album, go on tour. I felt sure I was getting better at it. But part of writing was just a wish to get to that magical place I’d been transported to when I was ten years old listening to a 45 of ‘Leaving On A Jet Plane’ by Peter, Paul and Mary—a place where feelings could be distilled and turn from vague to powerful. Like a glass of wine or a cocktail, music made life easier to handle.”

Girl to City is a tale of a suburban girl from “nowhere” who transferred herself from vague to powerful and takes us all to that “magical place.” It would make an excellent read for any artist struggling to make their way and find their voice.