The Girl from Berlin: A Novel (Liam Taggart and Catherine Lockhart (5)) 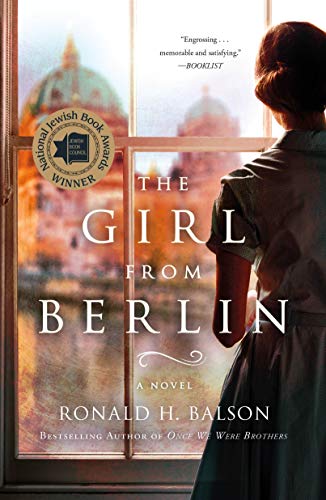 The Girl from Berlin is the fifth in the Liam Taggart and Catherine Lockhart series. It is the winner of the Book Club category for the 2018 National Jewish Book Award.

In this novel, a private investigator (Liam) and his wife, a bright and talented attorney (Catherine), come to the aid of an old friend in Chicago, whose aging aunt (Gabi) is about to lose a property dispute on her beautiful and productive Italian vineyard/farm, where she has lived her entire life. A billion-dollar company called Vinco appears to hold a valid deed for her property. On a judge’s ruling, Gabi has only a few weeks before she must surrender her property.

Taking on the case seems like a gift to Liam and Catherine’s restauranteur friend. From all appearances, Gabi has a hopeless case. In the beginning, Liam and Catherine wonder if it will become nothing more than a vacation in Italy. The chance of success appears very bleak.

Gabi gives Liam and Catherine a manuscript that she claims will explain the mystery of how she owns her property. Readers are swiftly drawn into long-buried secrets from Nazi Germany and one of the world’s finest violinists, a young Jewish woman from Berlin named Ada. Liam and Catherine are told that the manuscript will prove the veracity of her case. It is the memoir of young Ada and the gripping story of her miraculous life.

Author Balson delivers a thrilling page-turner, based upon very sound research and powerful, compelling characters. Readers alternate, chapter by chapter, between the present day, when Liam and Catherine are investigating the case and arguing in Italian court, and Ada’s life during the years of the Nazi Holocaust.

The story begins with Ada as a teenager living with her parents in Berlin, where she grows up and attends a Jewish day school. Her father is an excellent violinist. He is concertmaster of the Berlin Philharmonic Orchestra.

Ada’s father teaches her everything he knows about playing violin, and he soon realizes that she is a true prodigy. Her talent swiftly overpowers every violinist of her age, but also draws the attention of Nazi officers who attend her concerts and appreciate the arts.

Following one of Ada’s Berlin concerts, the frightful high-ranking Nazi SS officer Reinhard Heydrich fawns over her backstage. In a moment of foolish behavior, his field grade officer makes a fool of himself during the conversation and is demoted. Feeling intense anger over the scene, he blames Ada and her family for his demotion. Although Ada knows it was not her fault that the officer was demoted, she begins to realize how dangerous it is when a Nazi in the SS vows to murder her and her Jewish family.

As Germany descends into Nazi madness through the late 1930s and early 1940s, Ada is buffeted by the winds of war. She develops a powerful romance with a non-Jewish boy in her orchestra named Kurt. He dreams of a career in the arts, but his father forces him to join the army. Meanwhile, Ada’s rapidly rising reputation as a musical prodigy spreads throughout Europe. She finds a position in the city orchestra of Bologna, Italy. At first, the war seems distant. But not for long.

During a time when females are told to focus on cooking, cleaning, and child-rearing, Ada is a wondrous young woman with an unstoppable music career who fears nothing. She is powered by her musical talent and her burgeoning love for Kurt. Women almost never hold positions in the major orchestras of Europe. But Ada crashes through those barriers as if they did not exist.

Kurt is bright, caring, enjoys the arts, and is head-over-heels in love with Ada. He will do anything for her. While Ada lives out her destiny as one of the best female violinists in the world, Kurt is forced into the Wehrmacht. This is a tragedy for the ages.

Balson brilliantly weaves a powerful love story through time and space and into your heart. Ada produces her beautiful manuscript while imprisoned in the Nazi Theresienstadt concentration camp. It’s a heartfelt, glowing story of the terrible and powerful forces of Nazi society, of a Jewish girl’s incredible talent, of her becoming a mature woman, falling in love with her soul mate and risking her life to save the life of a small orphaned child.

The author could have expanded relevant details to enrich the quality of the story. We learn almost nothing about Ada’s extended family. Little is written about them celebrating Jewish holidays or observing religious rituals. Ada’s grandparents are introduced, but in a very cursory manner. They disappear from the story abruptly. We could have learned more about Ada’s relationship with them and if they survived.

We learn virtually nothing about what happens to Ada’s father while imprisoned in Buchenwald. Starvation, brutality and forced labor have reduced him to a shell of the man who was concertmaster of one of the world’s best orchestras and the loving father of our protagonist, Ada. His incredible, final sacrifice allows his wife and Ada to have a new start in the world. But we never learn what happened to him in that fateful prison. It’s difficult to ascertain whether the author wanted to spare the reader from passages too difficult to read, or wanted to save space in a fairly long novel. In this reviewer’s opinion, it deserves additional elaboration.

The novel might have also benefitted from expanding upon the lives of the loving and devoted servants in Gabi’s villa or about Ada’s mother’s late romance in Italy. In addition, Ada has a close friend in Italy named Natalie who participates with the local partisans, fighting along side other young Jews to damage the Nazi cause. We learn that they attack Nazi troops, munitions, and railroads. Yet Natalie’s exploits fighting with Jewish partisans are noticeably absent, along with answers about her survival.

It’s easy to understand an author’s conflict between telling a story in every detail, which often results in 500+ pages, or in finding ways to reduce the manuscript to make it more palatable to readers. There is no easy solution.

Regardless, this is an excellent, well-written novel with very compelling characters and a powerful message. Nazis always make perfect enemies and this is not lost upon the reader. But building our protagonist as a violin prodigy who has the soul of a saint and falls in love improbably with a non-Jew who adores her, makes a terrific story. Their survival is always at stake, while the world’s survival plays out everywhere. Tying Ada’s life into Gabi’s struggle to keep her home is a touch of genius.

Ronald Balson does an excellent job with character development and scenes are described with adroit skill. Ada will swiftly enter your heart, and you’ll never want to let her go. This rapidly moving story will gather up your heart and your hopes until a final, desperate, breathless conclusion.