The Girl Before: A Novel 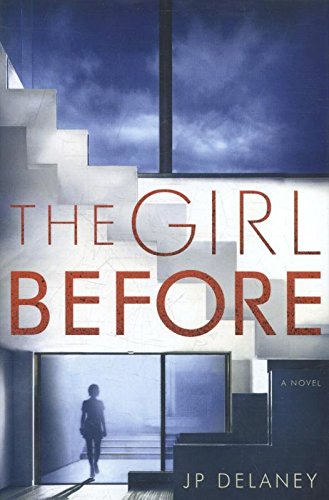 “The Girl Before will appeal greatly to fans of psychological suspense, even more to those who appreciate the chills of a good haunted house story.”

If you have Amazon’s new Echo device somewhere in your home, you might feel like it’s watching every move you make. In the guise of a nice woman named Alexa, it responds to your voice even if you’re only whispering, reminding you of what’s on your shopping list, answering questions about world events, and, if you like, controlling your home’s lighting and thermostats and perhaps even the security that keeps predators away.

If you like that feeling you’re probably a perfect match for the kind of “smart home” that seems to have a mind of its own. If you’re spooked by it and don’t mind getting a little more spooked about the possibilities, J. P. Delaney’s The Girl Before could be one of the best thrillers you’ll read in 2017.

Both of The Girl Before’s unreliable narrators are young women who welcome an interesting bargain: Live in an architectural masterpiece of a home in exchange for abiding by several strange rules. The home was built by a handsome, charismatic architect named Edward Monkford, who may or may not have had something to do with the mysterious death of his wife and son.

Both women accept the bargain for reasons connected to traumatic experiences in their lives. Emma, who’s recovering from a violent home invasion, craves the electronic security built in to the house. Jane, a single woman whose child was stillborn due to hospital neglect, feels unmoored from the predictability of her former life as a hard-charging executive and attracted to the idea of living in a completely new place.

Women with more intact psyches would never agree to the terms of the lease, which requires the tenants to submit to 24-hour a day surveillance and to agree to keep the space free of anything—such as books or additional furniture—that isn’t already carefully placed there by the architect.

From the beginning, the bargain is both unsettling and strangely seductive. The women agree not just to live in the house, but to exist in a life-altering state there. The house knows how much REM sleep they’re getting because it controls it. It sets the air temperature in sync with their bodies. And it shuts down its water, lighting, and appliances as punishment when occupants violate the rules of the lease.

Those rules deepen the intrigue of this story from beginning to end. Both women—like all prospective tenants—have to answer a questionnaire that probes the way their minds work. They’re asked “Would you sacrifice yourself to save ten innocent strangers? and “Do fat people make you feel: (a) sad; (b) annoyed?” and are required to answer all kinds of questions about how they would respond to challenging situations with legal and moral undertones.

All of this is due to Monkford’s eccentricity. He’s a genius fixated on architectural and aesthetic perfection who can’t abide any tenant who isn’t worthy of the space he has created. He’s obviously damaged, but the danger signals he sends to both Emma and Jane only compound his appeal as an irresistibly handsome man who’s bound to treat them poorly.

That description might deter readers who view themselves as feminists or who actively avoid any story featuring women characters who are controlled by men. It shouldn’t—because the truths that are gradually revealed show both women are far stronger than they first appear. In fact, inside this strange and beautiful house the whole idea of who’s really “in control” comes into question again and again.

For these reasons and more, The Girl Before will appeal greatly to fans of psychological suspense, even more to those who appreciate the chills of a good haunted house story. Like the residences in Shirley Jackson’s The Haunting of Hill House and Stephen King’s The Shining, this house inspires both intrigue and dread due to its architectural grandeur, odd interior spaces, and history of tragic happenings. Yet its ultimate terrors come from the connection between what happens within its walls and within the troubled minds of the people who live there.