The Gin Closet: A Novel 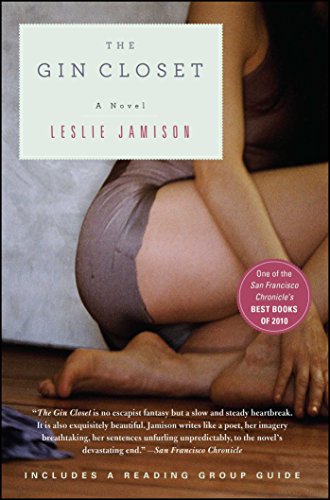 “Occasionally the literary world is treated to a book that seems to have been written with divine inspiration. This extraordinary debut novel by a new and very young author is just that sort of book. It is a rare combination of an intense and mesmerizing story and skillful, beautifully creative writing.

To summarize: a 20-something New Yorker, Stella, becomes involved in the last months of her aging and ailing grandmother’s life in Connecticut. From her own daily, vacuous life of working in a beauty spa and maintaining a sporadic relationship with a married man, Stella brings herself to the raw and sordid existence of her beloved Grandma Lucy.

Discovering that she can be of use to Lucy, Stella starts spending her evenings and weekends in Connecticut in willful obligation to provide aid and comfort to a confused and dying old woman. Realizing that there’s not much time left, Stella attempts to bridge some gaps in the family history by encouraging Lucy to talk about her life. As a result of this personal history, Stella learns there is another daughter in Lucy’s past—a sister to her own mother Dora, named Mathilda. But the details are vague, and Stella is lead to understand that Tilly had foresaken the family years ago in her youth and has not been in touch since.

But Tilly has her own story—a turbulent one that is rocked by alcohol, prostitution, desperation, and chronic proverty. On the heels of her grandmother’s death, Stella decides, against the advice of her mother and brother, to go in search of Tilly, hoping that some family reconciliation can still be effected at this point. Her journey of discovery leads Stella to the edge of the Nevada desert in a town called Lovelock and her finding the long-lost aunt living in a dilapidated trailer and trying to forget her pitiful life in the bitter sweetness of gin.

Initially not accepting the kindnesses offered by Stella and her family, Tilly slowly grows to accept them into her life. She reveals the existence of a wealthy son, Abe, who lives in San Francisco. As Stella begins to realize the horrific nature of an alcoholic life, and compares it in some manner to the emptiness of her own in New York, she decides that it would be good for both her and her aunt if they moved west to be near Abe and begin life anew.

Arriving in San Francisco, they move into the roomy apartment with Abe, who, in spite of his long-distance attempts to keep in touch with his mother, is a secular and distant young man. Yet his attempts to make Stella and Tilly feel at home are generous. He situates Tilly in a job at his own banking company. Stella, too, finds satisfactory employment at an inn.

For a while, things seem to moving slowly toward redemption. But it is at a Thanksgiving feast at Abe’s apartment, made up of Tilly’s co-workers, that Tilly once again gives in to her yearning for alcohol. After the meal, during a game of charades, a devastating revelation by one of Tilly’s alleged friends marks the turning point in her return to the old life she never could completely shake.

If the story itself is not entirely fresh in idea or new in theme, it is the beautiful writing that makes this work such a stunning debut. In the opening pages, Stella describes her life: “Living in New York seemed like a career in itself; just being there, opening my gills to the grit and heartbeat of the city. The coffee shops were thick with everyone I’d known in college, where I’d understood myself most sharply, my edges contoured by the constant presence of other people. . . . We spread ourselves like a glaze across hundreds of blocks, across brownstones.”

Unlike many new writers, Jamison doesn’t overuse metaphors in the text. Instead, the ones she does use are perfectly suited to the situation and add to the description. She describes a street person in San Francisco: “She wore an old gray suit, a man’s suit, with a black stain all over the chest pocket, like her heart had leaked dark blood.” There are no empty words, no rambling passages, no vague or illusory phrasings.

In the story, Jamison divides the telling between Stella and Tilly. Each character has her own distinct style with emphasis on her own proclivities. Stella is preoccupied with her relationships with men; Tilly with alcohol. This dual presentation allows the reader to understand the story in another dimension that would not be realized had the story been told only from one point of view. It also links three generations of wounded women with a fragile thread that binds their lives with hope, a yearning for love, and a search for meaning.

Knowing that authors like Leslie Jamison are out there writing books gives a new dose of hope to American letters. There really is not one page in this book that would defy a reasonable discussion of the developing theme or of writing style itself.