Gifts from the Gods: Ancient Words and Wisdom from Greek and Roman Mythology 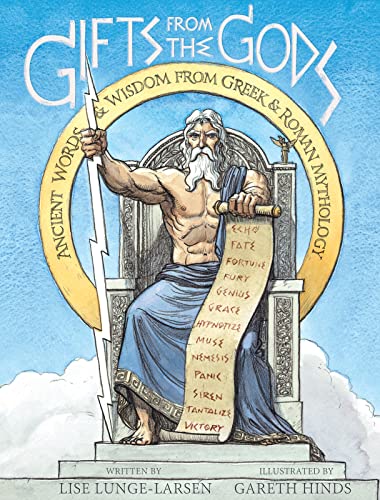 “While it has practical uses, Gifts from the Gods does not represent the author’s most compelling writing. The stories are too sketchy and disconnected for lovers of good literature.”

The territory where myths cross into words and thoughts is fleetingly explored in the comely Gifts from the Gods by noted storyteller and folklorist Lise Lunge-Larsen.

Arranged alphabetically, Gifts from the Gods presents a selection of 17 key words that spring from Greek and Roman myths of flawed gods, goddesses, heroes, and humans.

From “Achilles’ heel” to “victory,” the author’s clean, simple format involves displaying the illustrator’s sharply designed frame for each term, introduced on its own page with the preferred pronunciation and definitions. Spicing up those dry details is a superbly chosen excerpt from children’s literature.

The feature on “fury” will perhaps stir the strongest response. Mr. Hinds places the word in a fresh-blood red border tattooed by swirling leather whips and snakes. Stevenson’s Treasure Island provides an illuminating use of the word: “We must both have cried out aloud when our eyes met; but while mine was the shrill cry of terror, his was the roar of fury, like a charging bull’s.”

Accompanying the story of how the Furies, the three goddesses of vengeance, punish the murderers of two women, is Mr. Hinds’ full-page drawing of the goddesses, with their gruesome, gouged eyes; snakes clasped about their waists, and a whip in one’s hand. In the spot illustration on the following page, the goddesses have transformed into black bats swooping down to torture the evil men. The feature closes with Ms. Lunge-Larsen pointing out how words such as “infuriate,” “furious,” and “furor” come from the same root.

With this attractive, energetically illustrated volume, middle-school readers will gain a better understanding of how such commonly used words as “echo,” “grace,” and “muse” originated with the classical myths. Educators can use it as a classroom supplement for units on Greek and Roman mythology.

Ms. Lunge-Larsen’s increases the book’s utility by including a bibliography, an index, and a chart with corresponding Greek and Latin names, along with their role or status.

While it has practical uses, Gifts from the Gods does not represent the author’s most compelling writing. The stories are too sketchy and disconnected for lovers of good literature.

Those thirsting for more fully realized versions of Greek or Roman myths should choose the D’Aulaires’ Book of Greek Myths or, for adept readers, the novel-length versions by either Rosemary Sutcliffe or Geraldine McCaughrean.

And to get a more satisfying taste of Ms. Lunge-Larsen’s fine storytelling talent, reach for her piquant Norwegian collection The Troll with No Heart in His Body.