The Gift of Rest: Rediscovering the Beauty of the Sabbath 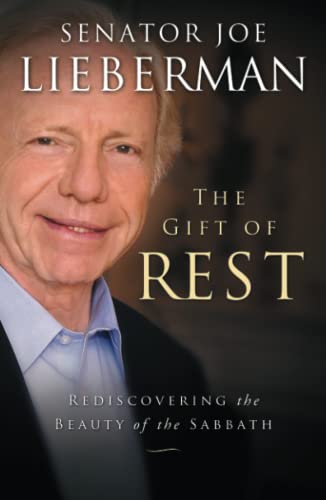 “The Gift of Rest is not a book predominately about politics; rather, stories related to Senator Lieberman’s political work are used to demonstrate the conflicts that arise between one’s faithful observance of the traditional day of rest and the exigencies of the modern world.”

Joe Lieberman, Independent United States Senator from Connecticut, is a man in the middle of today’s polarized Washington politics. In his public condemnation of President Clinton’s behavior during the Lewinsky affair, Senator Lieberman the Democrat rejected liberal relativism, grabbing the moral high ground. His emphatic public support of the first and second Gulf Wars further alienated him from the Democratic First Family.

Currently, he is attempting to build coalitions with both parties. Behind the political persona, however, has been the largely unseen Joe: a devout Jew who balances his deep commitment to traditional Judaism, particularly the Jewish Sabbath, with his contemporary responsibilities in the fast-paced world of Washington politics.

The Gift of Rest is not a book predominately about politics; rather, stories related to Senator Lieberman’s political work are used to demonstrate the conflicts that arise between one’s faithful observance of the traditional day of rest and the exigencies of the modern world.

What should a senator do if he is called on the Sabbath in order to cast an emergency vote on a piece of important environmental legislation he is sponsoring? Does he go to work? Does he even answer the telephone? Senator Lieberman’s answer is emphatic: Situations that require immediate action and will determine the life and health of individuals and communities should override proscriptions regarding work on the Sabbath.

So for readers who have found religious traditions too dogmatic for their complex lives, author Lieberman is reassuring. He attempts to bridge the gap between the ancient tradition of the Jewish Sabbath and the insistent worldliness of contemporary life.

Senator Lieberman’s ultimate purpose, however, as the title suggests, is to share his love of the Sabbath in the hope that the reader will be inspired to incorporate a day of rest into his or her life, whatever shape that life might take.

Senator Lieberman, along with his co-writer, David Klinghoffer, has come up with a clever device to achieve this goal: He escorts the reader step by step through the 24 hours of the Jewish Sabbath, which unfold from sundown on Friday evening through sundown on Saturday evening. The reader’s journey begins before Friday sundown with preparations. During the Jewish Sabbath, one is not to work in any manner, including such activities as turning on a light or cooking food, so all work must be accomplished beforehand. The reader learns of the Friday dinner, the intimacy between spouses encouraged during the Sabbath, Saturday morning prayers, Saturday afternoon’s leisure time, and the transition back to the world of work.

One nice touch at the end of each chapter is a list entitled “Simple Beginnings,” containing suggestions relevant to that chapter of how to get started in observing the Sabbath. In a sense, for those interested in slowing down the tempo of life, the book can serve as an instruction manual for the Sabbath from a religious perspective.

Additionally, the book can appeal to readers with a historical bent. For example, Senator Lieberman draws on much rabbinic scholarship to explain the reasons behind the practices of the Sabbath. He draws on friendships with rabbis around the globe to inform his commentary, and often quotes ancient rabbinic figures to explain the significance of particular prayers. If you are curious about the development and meaning of Jewish traditions, this book will introduce you to that world.

However, this book is limited in a couple of significant ways. While Senator Lieberman invites people of all faiths to take up the Sabbath as a valuable practice, atheists and agnostics might have a hard time finding a comfortable seat at the table. A constant refrain is that observance of the Sabbath is an honoring of God. There is little to no attention paid to the tensions between believers and nonbelievers; for example, Senator Lieberman does not take the time to effectively address the value of the Sabbath for non-believers in a non-religious context.

While Senator Lieberman clearly aims to draw in all people, he does not succeed in this sense. This problem is exacerbated by the narrowness of the prayers and practices of the Sabbath that Senator Lieberman includes. Despite brief references to the moral underpinnings of faith, the practice of the Sabbath is ultimately a glorification of God; the words spoken and actions taken are intended to honor and serve God, and to many this will seem like mere idolatry. This motif will put off many readers, especially those who have been dismayed by the overindulgent zeal of preachers on Sunday morning television programs.

For the religious skeptic or nonbeliever looking for a more philosophical approach to the value of a day of rest, read the first part of Rabbi Abraham Joshua Heschel’s The Sabbath.

To add to this polarization between the believer and nonbeliever, the book was written with David Klinghoffer, a rabbi who has been on record as an outspoken opponent of the Darwinian view of the world. One wonders if Senator Lieberman joins with Mr. Klinghoffer in denying the truth of evolution. If that is the price of a satisfying practice of the Sabbath, few with a modern education will want to join.

Even for believers, the book might not feel divinely inspired. Clearly, Senator Lieberman is immensely proud of his wife, Hadassah, his partner in the observance of the Sabbath over many years. He showers her with praise. But we have no firsthand exchanges between the two, nor with any of their four children. The reader does not get to know these people; as a result, the Sabbath experience lacks those magical interpersonal moments of love and connection one expects.

Without the richness of vibrant life on the page, the Sabbath begins to feel like form over substance. As for richness of style, lovers of the kind of vibrant voices and colors of a novel will not be satisfied: Much like the Senator’s public persona, the prose is generally flat and straightforward.

Ultimately, the success of this book lies in Senator Lieberman’s forthright, loving tribute to God and the Sabbath experience—whatever your feelings on religion might be. We do not often see such deep faith laid out so frankly; we feel Senator Lieberman’s dedication to and love of the Sabbath as his source of strength to create this work.

We also feel that Senator Lieberman is a good man who respects the people in his life. He emphasizes Judaism’s spiritual kinship with Christianity, and his good will toward both Democrats and Republicans.

Senator Lieberman seems to be touched by grace. His empathy and calm support in helping Sarah Palin through a particularly difficult time of the 2008 presidential campaign is a good example of the way faith can inform one’s day-to-day interactions with others.

While it is true that a diehard Senator Lieberman opponent or jaded political observer might very well see these attributes as the typical style of a career politician, others could come away from the reading of The Gift of Rest with their view of him illuminated; for example, that his denunciation of President Clinton’s behavior was indeed an act of conscience growing out of the moral underpinnings of his faith.