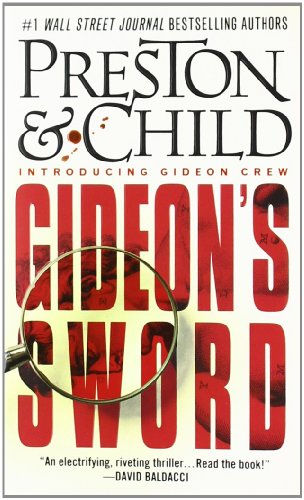 Douglas Preston and Lincoln Child have done it again—and have done so with efficacy. In creating a new hero, they have assured their many enduring fans a fast paced read. Gideon’s Sword is the first book of their new thriller series.

Unlike their famous and sometimes infamous FBI Agent Pendergast character, Gideon Crew makes mistakes and suffers because of them. This is a refreshing departure for this writing duo, and it is nice to read a more humanized characterization of the hero character.

Nodding Crane, a killing machine who is the physical representation of the antagonist, nearly executes a perfect coup de grace. Fortunately, for Gideon Crew, a single mistake changed their lives forever.

One would do well to be careful in associating with scientist Gideon Crew. Nearly all of those who do end up dead as he tromps from New York to China, to Dubai and back to New York to prowl the streets, hunting for information that his handlers fear will change the world.

Preston and Child’s use of description creates an atmosphere of reality. You sense the excitement as he and FBI agent, Mindy Johnson, speed through the streets of Hong Kong; they titillate by the foreplay of Crew and Johnson, and provide a good laugh as he and Orchid, a prostitute, take on various roles and disguises.
In keeping with their penchant for surprises, Preston and Child’s Gideon’s Sword continues serving up that on their writing menu—with just the right touch of spice knock it up a notch.

Frankly, had this reviewer been in one of the major box bookstores and had picked up this book he would have put it down. The cover design gives a different title than the spine and is totally uninteresting and dull. Fortunately, the names of the authors will save this book.