The Ghosts of Paris (A Billie Walker Novel) 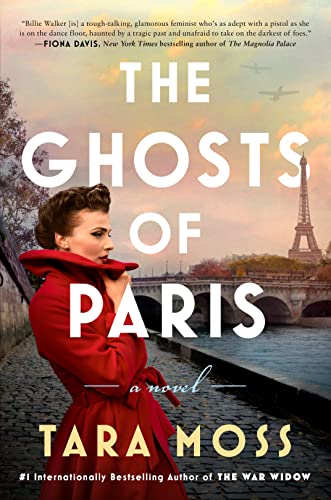 “full of derring-do, luscious descriptions in the cities of England and France, and appealing and not-so-appealing characters.”

Former war reporter Billie Walker has set up a private inquiry office in Sydney, Australia, in 1947. She follows in the footsteps of her late father, a former police officer, who first established the office. Known as B. Walker Private Inquiries, Billie attracts mostly women clients who either want to find a missing husband or prove a husband’s philandering for divorce purposes in a country with strict divorce requirements. Because of the successful conclusion to a famous and notorious case involving a Nazi spy in Australia, set in an earlier book (The War Widow), Billie’s practice has boomed. With the help of her assistant, Sam, she has solved all her inquiries to date.

The aftermath of World War II created chaos not only in European countries, but also in Australia. Billie’s short-lived marriage to Jack Rake, a wartime photographer, ended with his disappearance in Poland during the war. She mourns his loss but is determined to make her own way, a difficult proposition in a world where women are usually not allowed independence or ambition. Making her own way in this case requires bravery, physical courage, and moxie. Fortunately, her mother set an example of moxie and her father trained her to be courageous. Billie leavens both with compassion, needing some herself from time to time.

A new client comes to Billie to seek a husband who has been missing for two years, presumably in London or Paris where he went to accompany an Australian exposition. Billie’s husband has been missing for the same length of time. The client insists that Billie leave immediately for London and move on to Paris and offers a working rate that doubles Billie’s usual charges plus expenses. Billie must complete one job before leaving Australia but takes on the new challenge.

Billie finds the current philandering husband and creates a compassionate resolution to the situation where a wife wants a divorce. Billie is then free to leave, taking Sam with her, to the continent to begin the next private inquiry. She also determines to find Jack Rake’s ending, if possible.

In London, Billie and Sam follow several threads, including at a gathering at Australia House where she meets more than one suspicious character. On to Paris to find more clues. Billie’s client’s generous support enables the two to get rooms at the Ritz Hotel, frequent expensive cafes and saloons, and hire taxis. Not only does Billie follow leads to luxurious premises, she also must explore local dives and possibly dangerous neighborhoods, seeking to find the missing husband. Sam accompanies her to carry out some of the interviews and to protect Billie. Her search for her own missing husband involves a trip to the Paris morgue, reminding her of the ossuary in the Paris catacombs she and Jack had visited just before they married.

Finding both missing husbands entails several challenging situations, but Nazi gangsters, still alive and operating in London, Paris, and Australia, raise the stakes of Billie’s inquiry. They want her dead.

This is a story sure to command any reader’s interest. It is full of derring-do, luscious descriptions in the cities of England and France, and appealing and not-so-appealing characters. One rather cliché type scene where Billie looks in a mirror and the reader gets her description slowed this reviewer down, worried there would be more. There were not, or the action was so intriguing, they were not noticeable. Now, on to Tara Moss’s earlier novel, The War Widow!

Julie Weston is a multiple award-winning author of fiction, memoir, creative nonfiction, and essays. Her most recent mystery book is Moonscape, winner of a 2019 Foreword Indie Bronze Medal for Mystery. In 2020, she collaborated with photographer Gerry Morrison for The Magical Universe of the Ancients: A Desert Journal, a travel memoir of the Four Corners area of the Southwest.