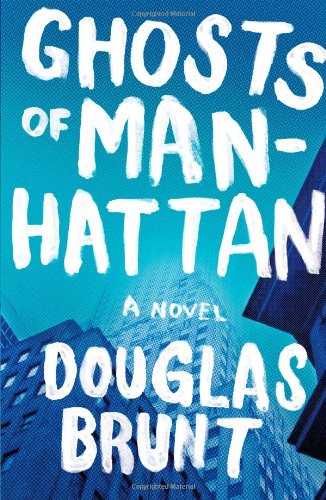 “. . . a harmless enough read for a holiday vacation.”

Ghosts of Manhattan is yet another novel promising to reveal the fabulously rich and sleazy inside story of contemporary Wall Street:

This newest entry into the genre of Great Wall Street Thrillers by Douglas Brunt is not particularly worse or better than the others. Mr. Brunt keeps the pages turning and often comes up with an original metaphor or sharp insight into human nature. Still, he never really escapes the clichés.

In this book’s version of the standard plot, Nick Farmer, a 35-year-old bond trader at Bear Stearns in late 2005, is beginning to feel too old for the booze-drugs-prostitutes routine and worried that his late nights and drunken arrivals home are somehow—but he can’t understand why—threatening his marriage to Julia, a beautiful and smart interior decorator.

On top of that, the office nerd (check) is discovering far too many risky mortgages as he digs behind the paper that Nick is selling. (Foreshadow alert: Bear Stearns would ultimately be swallowed up by JP Morgan Chase, at the brink of bankruptcy, because of its overleveraging and toxic bad loans, thus helping to spark the 2008 fiscal crisis.)

All this is reinforced with cocaine snorting at one luxe venue after another, as Mr. Brunt apparently tries to find new ways to outdo himself as well as all the other Wall Street authors.

There’s also a side plot where Nick is tempted to have an affair with Rebecca James, a correspondent for CNBC with wavy blond hair, “wide-set icy-blue eyes” and “classic, perfect beauty” who “seems to be a source of light herself.” This is presumably a not-so-private homage to the author’s wife, who happens to be the blonde Fox news anchor Megyn Kelly.

Mr. Brunt is good at analyzing motivations and relationships. For instance, Nick muses that with most people, even the most hardened financial types, “You can occasionally see the struggle rise to the surface of a facial expression, the way telling a lie to a loved one can cause a flicker of the eye or a rise in pulse rate.”

On the other hand, Nick seems unbelievably obtuse about himself. He can’t figure out why he was uncomfortable at a dinner where a Bear Stearns investment banker, Oliver Bennett, alternately flirted with Julia and one-upped Nick. Even more ridiculously, Nick sincerely seems to believe that— despite boarding school, lacrosse, and Cornell—he was just a poor country bumpkin when he arrived in Manhattan 13 years earlier.

So Ghosts of Manhattan is a harmless enough read for a holiday vacation. But after at least three high profile Wall Street thriller/noir novels and more than one major feature film and cable movie within the past two years, a reader has to wonder whether this one would even have been published if the author had a less influential wife.