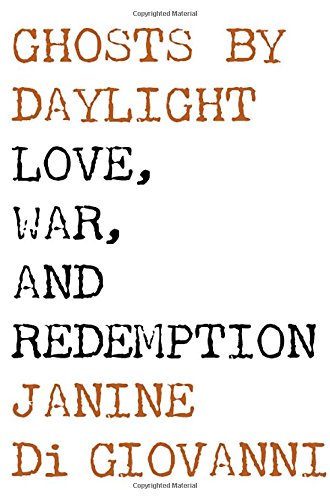 “Life in a war zone inevitably changes a person. . . . Ms. di Giovanni deserves much credit for her ability to shift between the two worlds and still maintain her equilibrium. Her decision to bear a child after meeting children who had been mistreated, malnourished, tortured—and worse—testifies to her strength and determination, but also forces her to accept the truth about her experiences.”

When it comes to dodging insurgents’ bullets, surviving days at a time with no running water and little food, and facing possible torture and rape, Janine di Giovanni demonstrates incredible mettle. But place her hours-old infant in her arms and she crumbles under the awesome responsibility associated with caring for a defenseless baby.

Ghosts by Daylight chronicles Ms. di Giovanni’s experiences as an award-winning war correspondent, but also relates her difficulties adjusting to motherhood and her tumultuous relationship with the true love of her life.

Throughout this moving memoir, Ms. di Giovanni paints a picture of opposites, using detailed, descriptive, and honest language. On one hand, she offers the reader a depiction of the chaos, perpetual danger and death that pervades Bosnia, Sierra Leone, and other war-ravaged nations she covers as an investigative war reporter. She gives chilling accounts of her first big story in Palestine during the first intifada, her experiences at the Gaza Strip where gunfire becomes a common daily occurrence, and being held at gunpoint by a nervous young government soldier in Côte d’Ivoire.

Her tale later shifts as Ms. di Giovanni illustrates in detail her home in Paris with its “. . . huge great rooms with high ceilings full of light that poured onto the parquet floors, and corridors that led to room after room.” This resplendent apartment is a far cry from “. . . the filthy, remote boarding houses . . .” in which she had often found herself while in Africa or one of the other war-torn countries from which she reported.

Although Ms. di Giovanni seems ready to trade her life in politically unstable countries for a more civilized existence in France in 2003, she harbors a deep-seated fear of this new reality. She says, “I was not afraid when I was in the middle of chaos. It was real life with its vast responsibilities and wells of insecurities that frightened me.”

Friends recognized her “addiction” to the unknown dangers she faced while in these politically unstable countries, even though she did not. A trauma specialist in London tells her, “There are people who live in extremes and you are one of them. You cannot think that will not affect you in some way. It has. It always will.”

The reader becomes privy to Ms. di Giovanni’s misgivings, fears, and physical trials during her pregnancy and delivery. After giving birth, she is assaulted with guilt and—worst of all—a feeling of weakness. The fortitude that carried her through civil unrest is replaced with unreasonable fear that irreparable harm will come to her child.

Through this uncertain time in her life, Bruno Girodon, a cameraman for the main French channel, France 2, whom she met in the summer of 1993 when she was working for a British newspaper, remains her stalwart supporter. Ms. di Giovanni credits her husband for what appeared to be his natural proclivity for fatherhood. “Bruno seemed, unlike me, utterly comfortable with parenthood. I felt guiltily relieved that at least one of us could cope with it,” she writes.

In addition to Ms. di Giovanni’s war reporting adventures and adjustment to motherhood, the book chronicles her relationship with this man, who more than anyone else “got her.” Like a 1950s romance-war film, their story reflects an exciting, elusive relationship that “. . . thrived on complications.”

The ghosts of war haunt the couple until the complications become insurmountable. Although Ms. di Giovanni insists she and Bruno have been unaffected by their demanding, dangerous occupations, their lives begin to unravel. While Ms. di Giovanni begins to achieve a comfort level as a mother, Bruno slips into a slow meltdown. He begins to have nightmares that exacerbate his physical exhaustion and mental frailness and eventually lead to alcohol abuse.

The author’s attempts to help him regain a grasp on life fail and she realizes that, as much as she wants to cling to those earlier, happier days, it is time once again to move on. Calling on her inner strength, Ms. di Giovanni admits that “People who deeply love each other cannot always live together; this is the real sadness of life.”

Life in a war zone inevitably changes a person. Assimilating into a society where the general population has never smelled firsthand dozens of bodies rotting in a trench or felt crippling fear induced by the point of a bayonet pressed against their shoulder challenges the bravest individual. Ms. di Giovanni deserves much credit for her ability to shift between the two worlds and still maintain her equilibrium. Her decision to bear a child after meeting children who had been mistreated, malnourished, tortured—and worse—testifies to her strength and determination, but also forces her to accept the truth about her experiences.

She writes, “But the birth of my son opened up receptacles of recall, of memory, of those wars. I was not as unbroken as I had thought.”

Ghosts by Daylight is a story infused with love: di Giovanni’s love of her job as a war correspondent, love of the one man who could frustrate, but also delight her, and unequivocal love of her son. The book also shows that seemingly invincible and unflappable war correspondents are human, just like the rest of us.