The Ghosts of Belfast (The Belfast Novels) 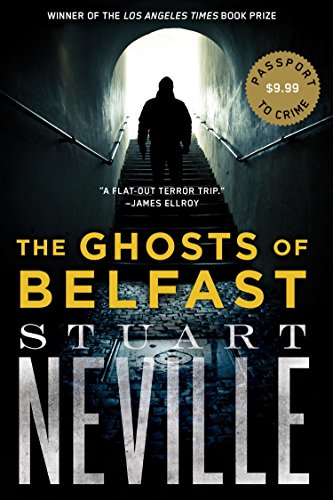 “an obsessive page-turner, filled with gasp-inducing twists and thrills.”

The Ghosts of Belfast, the debut novel by Stuart Neville, is arguably a noir classic. Like novels such as Jim Thompson’s The Killer Inside Me, Ghosts literally defines the noir subgenre. The book’s protagonist, former IRA killer Gerry Fegan, is a dark, tortured soul, his life spiraling out of control as he lives precariously on the boundary between good and evil.

When the story begins, Gerry, recently out of prison, is haunted by the phantoms of 12 people he killed in his IRA days. Gerry wasn’t a born killer. As a young Catholic boy living under oppression and inequality in Northern Ireland, he saw no options but to join the IRA freedom fighters. His leaders sent him to commit murders, some planned simply to gain glory and power for a particular leader. But it’s Gerry who is now left with the deep guilt . . . and the ghosts. Readers first find Gerry drunk in a bar:

“Maybe if he had one more drink they’d leave him alone. Gerry Fegan told himself that lie before every swallow. He chased the whiskey’s burn with a cool black mouthful of Guinness and placed the glass back on the table. Look up and they’ll be gone, he thought.

No, they were still there, still staring. Twelve of them if he counted the baby in its mother’s arms.

Gerry knows what he must do—murder each person who persuaded him to kill one of the 12 now haunting him. With each new murder he commits, one ghost disappears, the one whose revenge has been realized.

Gerry’s first two revenge murders go pretty easily, but then politicians in Northern Ireland and England get into a stir. They fear these killings will endanger the fragile peace they’ve worked to achieve—a peace that now provides many of them with power, money, and cushy lives.

As the murders continue, Gerry seems unstoppable; but soon some of his old IRA mates—now slick politicians or their henchmen—figure out that Gerry is the killer. Yet it would hurt them politically for the story to get out publicly that the killer is one of them. They’d prefer to blame the English or the police and kill Gerry themselves.

Various people begin to hone in on Gerry—Scotsman Davy Campbell who is an English mole in the IRA; Paul McGinty, a former IRA fighter but now a slick and wealthy politician; and Bull O’Kane, a murderous old IRA leader who hasn’t given up his original battles and hates politicians like McGinty.

They all find Gerry Fegan’s vulnerable point: He’s fallen in love with Marie McKenna who has a young daughter Ellen. They know they can get to him through Marie and Ellen—even if it means killing one or both.

That pursuit makes the book an obsessive page-turner, filled with gasp-inducing twists and thrills. Each sentence builds on the intense suspense, and the reader might even proceed with one hand over the next page or paragraph so as not to accidentally see what’s coming next until just the right moment.

As the murders unfold and numerous people search for Gerry, the reader also learns a bit about Northern Ireland’s complex history and politics—at least from Neville’s viewpoint. IRA freedom fighters certainly had a just cause, but many were corrupt and sought individual power and glory. Their enemies, such as the Ulster Constabulary and the English colonizers were equally corrupt, if not more so.

Readers familiar with those times in Northern Ireland will understand the relevant historical and political issues. But that knowledge isn’t a requirement for appreciating the story. A discerning reader will be able to fill in the blanks, learn by context, and may even want to research terms like “The Troubles,” “Stormont,” and “the unionists.” This gripping tale is certainly worth the effort.

First published in 2009, The Ghosts of Belfast has been rereleased by Soho Crime as part of its Passport to Crime collection. The collection celebrates that imprint’s 25th anniversary with the rerelease of 25 international or multicultural titles, each the initial volume of a notable series.

Ghosts is Book 1 of Neville’s Belfast Novels, which include Collusion, Stolen Souls, The Final Silence, Those We Left Behind, and So Say the Fallen. Many readers will doubtless want to devour the entire Belfast series after experiencing the rich noir tale told in Ghosts.