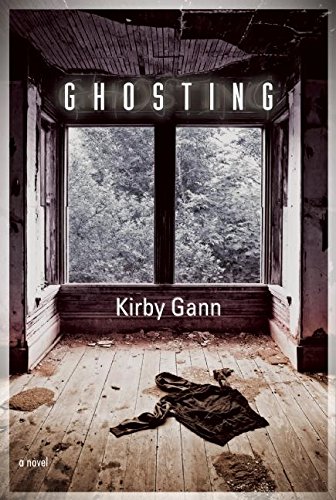 “Ghosting might not please the average American reader. Mr. Gann asks a lot from his readers—so many names to keep straight, so many difficult passages to wade through. He offers very little sex and pyrotechnics in return. But for the narrow sliver of readers who crave dark opera and rural goth, Ghosting is a very worthwhile challenge.”

Pirtle County, Kentucky, is not a very nice place. People are terse and provincial. The county is full of old families with difficult histories and haunting memories. Cole Prather is a young ne’er do well from Pirtle County. His typical day involves smoking a joint or two, passing time, and trying not to make enemies. Then his older half-brother disappears and Cole becomes the unlikeliest of private investigators. This is the setup for Ghosting, Kirby Gann’s oddball literary fiction mystery.

While Cole Prather is at the center of Ghosting, the book is driven by a true ensemble cast. Cole’s family includes a mother who still sleeps around in her 50s, an older brother, Fleece who doesn’t acknowledge that Cole exists, and a father whose long-ago death still looms over the family.

There’s also Shady Beck, a former girlfriend of Fleece, now a friend of Cole and the Greul family—powerbrokers and drug dealers. Old man Greul is dying, and one of the many subplots in Ghosting concerns his real politik estate planning with his son, Spunk, and business partner, Arley. There’s also a former addict, now preacher; a menacing caretaker of an abandoned seminary; and an elderly bad-ass who flew missions during the Bay of Pigs. Mr. Gann’s Pirtle County has more freewheeling eccentrics than “The Simpsons’” Springfield, each one is rated R in one way or another.

Ghosting is a highly intelligent book. Sentences are dense with extra phrases and modifiers. The following sentence is typical:

“Only six months out of school and her life has moved on from this, from the hulking boys finished with athletics on the field now committed to lifetimes of fandom, strutting among themselves in thick gusts of obscenities; the house rooms shining open through bare windows; the bass beat of hip hop clomping in battle against the southern rock chugging from a higher floor.”

“His head jerked up as he coughed out what looked like a clump of blackberry compote. The jelly caught and hung pendulous from whorls of beard even as his head fell back again. The substance rolled over itself slow and hypnotic shifting shape as it wormed from whisker to whisker, the lamplight shifting over the surface as it wandered, wavered, until its own weight pulled it onto the floor with a dull splat.”

Passages like these are alternately Ghosting’s greatest asset and liability. On the one hand, it is impossible not to admire the precise and imaginative mind that creates these scenes-within-a-scene. But the complex sentence structure and relentless asides bog down the book. This reviewer has read books twice this size in less time. Parts of Ghosting cry out for a ruthless editor.

Ghosting fits into a subgenre of intelligent fiction about loser men in gothic situations (i.e., Tristan Egolf’s Lord of the Barnyard, James Gunn’s The Toy Collector, George Rabassa’s Miss Entropia and the Adam Bomb); however, Ghosting lacks the slacker humor of these books for Mr. Gann takes himself more seriously than he aforementioned authors.

Ghosting might not please the average American reader. Mr. Gann asks a lot from his readers—so many names to keep straight, so many difficult passages to wade through. He offers very little sex and pyrotechnics in return. But for the narrow sliver of readers who crave dark opera and rural goth, Ghosting is a very worthwhile challenge.