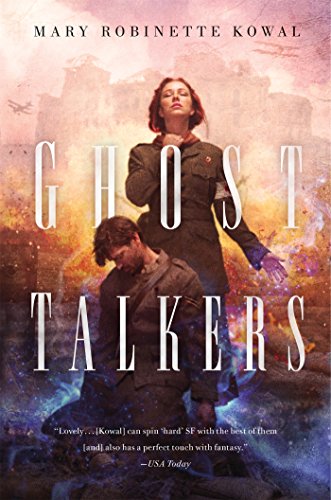 “the mix of romance, mystery, history, and the supernatural will appeal to readers looking for an easy read, a splash of nostalgia, and a moment of escape.”

Equal parts historical fiction and fantasy, Ghost Talkers is the tale of Ginger Stuyvesant, a medium during World War I enlisted in the British “Spirit Corps,” an organization that has weaponized spiritualism and collects reports from last moments of the dead, hoping to gain valuable intelligence on enemy movements. While taking a report from a soldier, Ginger uncovers a possible traitor inside the ranks of the British military who is attempting to undermine and duplicate the work of the Spirit Corps within the German war machine.

Mary Robinette Kowal has created a very fluffy, candy-coated page turner in Ghost Talkers. The romance and dialogue are extremely authentic to the era and nostalgic to anyone who appreciates ’30s and ’40s cinema. The relationship between Ginger and her fiancé, Ben, is very old-fashioned and syrupy-sweet, the war keeping them apart while they struggle to spend time with one another and ignore the underlying truth—that one or neither of them may come back from the war alive.

Kowal makes a valiant effort to create a strong protagonist, yet a believable character in Ginger for that era, though there were times when the constraints of her time, as a female with no rank or authority, were embellished slightly for plot purposes alone.

When Ginger approaches the Brigadier-General with information that one his soldiers was murdered, his dismissal of Ginger and insistence that she “go sit down and be quiet, and leave the war to the men,” does not ring true if intelligence is the sole purpose of the Spirit Corps. It seemed too convenient for Ginger to be dismissed so casually, and although it is explained why she was brushed off further along in the text, it was too little too late.

The constant mystery of the identity of the traitor also seemed to coalesce into a list of similar plot points that seemed relevant, but in the end were just coincidence to maintain tension and conflict, lost in a haze of miscommunication and unfortunate events that felt, again, too convenient.

Ginger is a likable protagonist, and her weakness and strengths are believable. Her power as a medium is seen as fragile. Stepping into the spirit realm is not a superpower, but rather a gift that can put Ginger in danger if overused. If not for this limitation, readers would not care much about what happens to the characters, especially since any one of them could be the traitor, and some are already ghosts that are set to eventually cross the “veil” toward their final destination. It isn’t clear if Kowal considered reader investment in a major character that is already dead less than a quarter of the way through the novel.

The story addresses sexism and racism of the era, but it is not a socially heavy book. The themes have a light touch, meant to maintain sensitivity while remaining historically accurate. Overall, Ghost Talkers is an entertaining read with very shallow emotional investment. Mary Robinette Kowal’s prose is enjoyable and the mix of romance, mystery, history, and the supernatural will appeal to readers looking for an easy read, a splash of nostalgia, and a moment of escape.