The Ghost at the Feast: America and the Collapse of World Order, 1900–1941 (Dangerous Nation Trilogy) 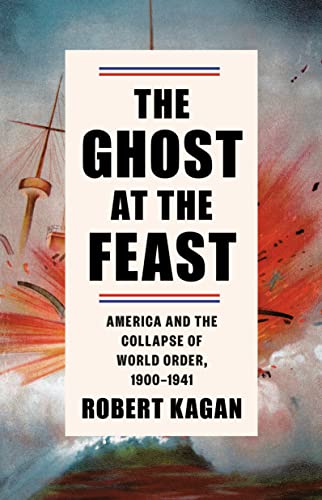 America at the turn of the 20th century was a country just beginning to determine its place in world affairs, trying to maintain a splendid isolation from the alleged tawdriness of colonialization and European power politics. But as this second volume in a planned trilogy from Robert Kagan narrates, the responsibilities of becoming a de facto empire, however unintentional, combined with the rise of new military technologies and the integration of America into a global commercial and financial network, pulled America, however reluctantly, out of self-imposed separation from world affairs.

Kagan begins his narration with the American victory of Spain in 1898, leaving America in possession of Cuba and the Philippines, forcing America’s leaders to assume an imperial role, however distasteful they considered it, of governing these territories that viewed America as occupiers only slightly better than Spain.

Invoking the Monroe Doctrine in Cuba and desiring to keep a rising and increasingly aggressive Germany from occupying the strategic Pacific island nation, America begins a century long, often fraught relationship with both countries, marking the “closing of the frontier” in the United States as the country’s leaders begin to take a more interested view of world affairs. As America begins to look for more foreign markets for its increasing industrial capacity, the early version of globalization begins to settle in, as American business, especially banks, begin investing heavily in Europe.

Unfortunately, the tensions in Europe also continue to increase, leading to the great crisis of July 1914 and the outbreak of war on the continent. The author brings some unique perspectives of the tightrope that Woodrow Wilson tried to walk to maintain a true neutrality in the face of unrestricted German submarine warfare and the increasing economic integration of America’s factories, farms, and banks in the Allied cause.

When Germany, desperate to try and defeat the Allies before their own economy collapses begins a second round of unrestricted submarine warfare in early 1917, President Wilson reluctantly leads America into the war to “make the world safe for democracy.” The intervention of the U.S., even though it takes over a year to make a significant battlefield presence, is decisive in turning the tide of the war and forcing Germany to accept an armistice in November 1918.

Where the author really begins to make his thesis for the book stand out is the analysis of the interwar years from 1919–1939. Although many historians focus on the 1930s as the era of appeasement that gave rise to Hitler and Nazi Germany, Kagan goes back another decade to argue that World War II was made foreseeable by the failure of American leadership at the end of World War I to secure a lasting and just peace. Given the reluctance with which Congress voted for war, combined with the horrendous casualties suffered by the American Expeditionary Force for a fairly short period of heavy combat and the cynicism of post-war America, a swift “return to normalcy” seemed inevitable. The rejection of American participation in the League of Nations was compounded by the naïve insistence on early arms control treaties and measures to outlaw war, and Kagan makes a compelling case that a deliberate use of American economic might, combined with some level of force backed diplomacy might have arrested the rise of fascism and ultimately Nazism in Europe.

When a new European war breaks out in 1939, America is once again thrown into a debate about neutrality, made more intense by the experiences of World War I and the fear of Nazi aggression. President Roosevelt finds himself facing many of the same challenges that President Wilson faced in trying to support Britain while never going farther than America public opinion will allow. His task is made more difficult by a rising and aggressive Japan eager to assume the role of the major power in Asia.

Although FDR is more successful than Wilson in getting Congress to fund a military buildup from 1939–1941, when the Japanese bomb Pearl Harbor, the American military and economy are still getting geared up for what will become a global, mechanized, and industrial war. This is where the author concludes this volume, no doubt ready to pick up as America finally assumes, albeit reluctantly, a role in world leadership.