Get Well Soon: History's Worst Plagues and the Heroes Who Fought Them 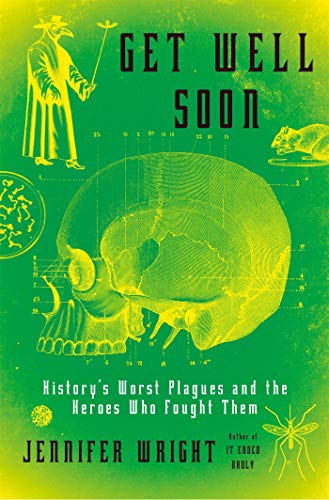 Jennifer Wright’s newest book, Get Well Soon: History’s Worst Plagues and the Heroes Who Fought Them, is a gut-souring, hilarious, meticulously researched medical wonder. Wright introduces readers to some of the filthiest conditions ever recorded that produced some of the most devastating plagues in world history.

The book opens with the withering description of the Antonine Plague, a disease that presented in rash-coated tongues, bloody vomit, and black excrement—and which may have been the true cause of the fall of the Roman Empire. Next is the Bubonic Plague (the Black Death), which terrified people into doing anything—including drinking their own urine and living in filthy sewers—to ward off the symptoms. And then there is the chilling account of “The Dancing Plague,” a disease where people began dancing wildly and did not stop for days, until their bones protruded from their bloody feet and they died from exhaustion, dehydration or stroke.

With fast-paced wit and impeccable detail, Ms. Wright explains various eccentricities of the times, including how people believed that miasmas (bad-smelling air) caused plague, and therefore thought it logical to live in sewers or breathe in foul odors as a sort of “vaccination” against diseases; and how some doctors wore waxed robes and donned humongous bird-beaked masks stuffed with sweet-smelling flours or other potions to ward off disease or evil spirits.

Wright also tickles the funny bone with descriptions of various cures that were used on the diseases, including exploding frogs and chopped onions dispersed all over houses. Some of the “cures” are recognizable as precursors to modern day medicine, like directing people to drink boiled water, engaging in the disposal of filthy bed sheets, and disposing of rotting corpses instead of letting them pile up in the streets.

This delightfully woeful book discusses the cause, symptoms, and effects of everything from syphilis to cholera; tuberculosis to typhoid to the Spanish Flu. There is even a chapter on “lobotomies” and how physicians who once killed their patients by mistake could now claim that their treatments and procedures were successful because the patient did not die, though they ended a mindless zombie.

One case in point is the unfortunate story of Rosemary Kennedy, whose oxygen-deprived brain led to temper tantrums of frustration. Because her father was afraid she “would have premarital sex and embarrass the family, he decided a lobotomy might be a cure for her unpredictable behavior.” As the story goes, the lobotomy left her incoherent, incontinent, and unable to walk or talk.

This is a wonderful book that makes for fabulous scientific and recreational reading. There are several horrifying “I-just-can’t-look-away” historical photographs, including an image of a child with smallpox, a man with leprosy, and a poor soul with bubonic plague. There is also a section on how and why we as a society should learn from our past so that we are not condemned to repeat it, and a detailed list of author's notes and source material.