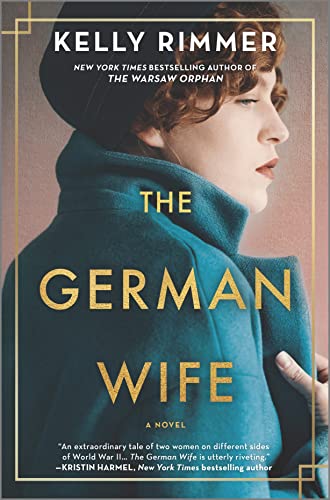 Nothing is more heartbreaking and disturbing than war. With The German Wife, we are transported to Berlin during World War II in this poignant tale about two women who lead divergent lives and beliefs yet prove to be alike in many aspects.

In 1930, Lizzie Davis is living in the small town of Oakden in Dallam County, Texas. She is content with her life as she labors at the family farm, driving their new tractor, plowing wheat, tending to the garden and livestock, and performing the many tedious farming chores most men would find overwhelming. Lizzie is following in her father's footsteps and is more skilled with her responsibilities than her older brother, Henry. She is determined this is her life's work, planning to spend her life here with no intention of ever getting married or having children.

Though Lizzie takes on the brunt of the duties, she is not bothered by Henry's lack of desire for this occupation. He loves Betsy, a local girl, but a relationship is out of the question because she comes from a wealthy family and her father wants her to have nothing to do with a "dirt-poor farmer."

"I'd been on enough dates these past few years to have quietly decided that romance wasn't for me. I liked simpler things—the feel of sandy dirt on my skin after I plowed a field, the joy of a new foal's birth, the sight of those first green shoots breaking through the soil as the wheat seeds germinated. There was nothing I enjoyed more at night than to sit under the stars, taking cautious sips from the bathtub gin Henry secretly brewed in one of the barns, enjoying the silence of the high plains with my brother by my side."

Meanwhile, thousands of miles away in Berlin, Sophie von Meyer, wife to Jurgen Rhodes, born into money, is now very content with her life. Her best friend, Mayim, whom she has known for years and is closer to than a sister, lives with them. During this time, Hitler is showing hatred toward the Jews, so Sophie believes Mayim is safer with them than on her own. And, since Sophie has discovered she is newly pregnant, she knows Mayim will be a big help to her when her baby is born.

In 1933, Sophie has two children, Georg, age three, and Lauren, eight months. Mayim is a lifesaver to the family as she cares for the children as though they are her own while providing company to Sophie while Jurgen works long hours. He and his friend, Karl, become founding members of the Society for Space Travel, a passion of Jurgen's, and they spend all their free time tinkering with homemade rockets. Jurgen's ambition is to one day launch a rocket to the moon.

Sophie's misgivings escalate as Jurgen spends more and more time away from home:

"Their dream was to design a rocket which would take man to the moon, a prospect so absurd I struggle to understand why Jurgen even entertained it."

With these aspirations in mind, as the Natzis take over Germany, the two men are offered distinguished positions to fabricate rockets for the Reich. They obtain substantial incomes to provide for their families in return for their knowledge and skills.

Jurgen's aunt, Adele, is a fixture in their lives as they try to protect the children and Mayim from the horrors of war. Berlin falls under Hitler's regime, and Sophie sees her city collapsing, as she hears of the seizure of the Jewish people and their imprisonment in camps. Though Sophie and Jurgen oppose Hitler and his ideologies, life soon becomes a matter of bowing to the Reich to survive. They do not participate in the party's work but put up an excellent front to appease them for fear of their lives and their children's futures.

Twenty years pass, and we segue to 1950. The war is over, and Jurgen and other German researchers are offered sanctuary in America to aid in the upcoming space program. Now residing in Huntsville, Alabama, Sophie finds adjusting to her new country difficult. Though there are other German families with her, the Americans distrust the newcomers, which she finds unsettling.

Lizzie is no longer in Texas after a drought and hardship caused the loss of her beloved farm, and her parents' death makes her relocate. Her plans to never marry are quashed, for she and Henry both need a home and stability. Lizzie tirelessly labors at two jobs to support them. Henry, suffering from emotional instability, cannot hold a job. At the hotel where she works, she meets Ca, a widower, and they become friends. Lonely, he is soon besotted by her, proposes, and offers to give her and Henry a good life.

Hoping the service would straighten Henry out, Lizzie suggests he enlists, but he returns from battle with more problems. He hates and is suspicious of the new German residents and harasses them by painting graffiti on the street, especially in front of Sophie and Jurgen's home—all because he believes they are members of the SS. He hopes to run them out of town as his violent behavior escalates. Meanwhile, Sophie wonders if things are worse in America than in Berlin. Will her family ever be safe?

Hair-raising and heartbreaking, The German Wife depicts the cruelty of a madman who brainwashed his followers into believing he was right in his actions while destroying the lives of countless innocent people. Actual facts motivated Rimmer to write this novel about events during World War II. This story offers an excellent example of the fact that we should never judge others.