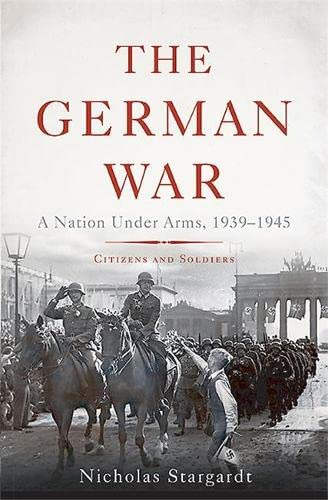 “The German War is an important scholarly achievement in the field of modern German history, and it is written with an epic narrative sweep.”

The Second World War has produced no shortages of history books, but as Nicholas Stargardt observes, “We still do not know what ordinary Germans believed they were fighting for and how they experienced and sustained this war until the bitter end.” The German War: A Nation Under Arms, 1939–1945 seeks to answer this question.

Stargardt is Professor of Modern European History at Magdalen College, Oxford. He fuses academic rigor to a finely paced historical narrative. In the overstuffed historical field of Second World War history, The German War stands out for what it attempts to achieve and its importance. What were the Germans thinking during this time period? And why did they behave as they did?

The popular consciousness has seen the Germans during World War II as either black hat villains or helpless dupes. He also writes an objective and fair history that neither minimizes the atrocities or kowtows to victimization rhetoric used by the extreme right. Stargardt paints a canvas revealing individuals in a much more nuanced and complex light. The Nazi regime was not nearly as monolithic as imagined and the German people were not collectively duped. Things become far more muddy and entangled to accommodate simplistic moral judgment.

Stargardt works to reverse the Cold War mythology of the “good” Wehrmacht and “bad” SS. This historiographical challenge works in tandem with his selection of “ordinary Germans.” These include Lisolette Purper, a photojournalist from Berlin; Victor Klemperer, a Jewish convert to Protestantism and academic; and Peter Stölten, a Berlin-area dispatch rider and tank commander.

The narrative weaves between these individual stories and large-scale events with a cinematic momentum akin to The War, the documentary by Ken Burns. Unlike The War, The German War is approached from a different national and historical perspective. In the minds of Germans, the Second World War brought echoes of The Great War and Germany's defeat in the Napoleonic Wars. The Nazi regime sought to absolve these historical defeats by solidifying a continental empire under the aegis of the “racial state.”

The First World War hangs like a ghoulish shadow over Germany in 1939. Among the many reactions Germans have is that the next war should be fought with more ruthlessness. Added to this burdensome historical weight is Germany's precarious geopolitical position in central Europe. While Germans remain patriotic during the euphoric early days of easy conquests in the West, they dread a two-front war.

Germans hoped to avoid this debacle although they are divided on Hitler's Non-Aggression Pact with the Soviet Union. Hitler not only rode into power on the promises of making Germany great again, but also on an ideological platform that was passionately anti-communist. Once Hitler decided to invade Russia, soldiers and citizens were sympathetic. As one soldier wrote to his wife, “Here we really come as liberators from an unbearable yoke. I have seen images in the GPU [former NKVD] cellars which I cannot and will not describe to you in your condition. 3,000 to 5,000 lie in the prisons, butchered in the most bestial fashion.” He concludes by resenting how “They wanted to let these Jewish-Asiatic hordes loose on our land of culture.”

Unlike the conquests in Western Europe, the war would be fought with a genocidal ruthlessness. Both ordinary soldiers and major Nazi personalities treat the Soviet threat and the Jewish threat as one and the same. While the Catholic Church protested against the Nazi euthanasia program, it remained deafeningly silent when Jews began disappearing from Germany's cities to be relocated.

Stargardt goes into detail about the everyday reaction (and non-reaction) to the increasingly aggressive anti-Jewish measures. It can be summarized as similar in behavior to not talking politics or religion around the Thanksgiving dinner table. The SS surveillance and patriotic fervor connected to the war effort created additional incentives for silence and non-discussion.

The German War delves into civilian reactions to events through a number of primary sources. These include letters and newspaper articles, but Stargardt also looks at the data collected by the SD, the intelligence wing of the SS. The use of SD data interwoven with individual correspondence makes The German War invaluable as history, sociology, and media studies.

Usually a historian has to perform some intellectual guesswork or conjecture in accurately understanding what individuals thought during a specific time period. The SD's rigorous record keeping provides a window into ordinary German attitudes and sensibilities. Stargardt shows the constant flux and variability of these attitudes. The Nazi regime did not have political commissars until almost the end of its existence, instead relying upon the home and the churches as pedagogical instruments.

During the early days of the war, the Nazis made a concerted effort to distinguish the heroic sacrifice of the Wehrmacht from the everyday deprivations on the home front. This attitude tied into Nazism fanatical militarism and imperialism. The rhetoric of the heroic soldier and the patriotic spouse was highly gendered and severely conservative in message. Only when Germany faced the existential threat of imminent defeat did the Nazis rely on women to perform military tasks on the home front.

When the Allies began to bomb German cities the populace had to contend with the realization that “over there” ceased to exist. Bombings yielded demand for retaliation and when retaliation was not forthcoming, the German populace sought to target Nazi Party members to vent their fury. Throughout the book, Nazi Party bigwigs get criticized and attacked for their hypocrisy and high living while ordinary Germans survive off rations.

In the beginning it was jokes and satirical songs, but these attacks became physical assaults once the tide turned against Germany. While few Germans remained critical of the Nazi regime, they did not abandon it. After Hitler survived his assassination attempt, it galvanized support for the regime.

As the Allies crept closer and closer the reaction became one of increased patriotism. Germany was not Italy and chose to dig in when fighting became less about Hitler's “war against the Jews” than about survival. The existential threat was exacerbated by being fed propaganda about the Allies wanting to exterminate the Germans the same way they were exterminating the Jews. This only made them fight harder and hold out longer.

The German War answers the most challenging of questions: Why? Stagardt's book also helps broaden the historical narrative to include the experiences of German soldiers and citizens. This provides a more accurate historical picture and reveals insights valuable from a sociological perspective. He brings together a multitude of primary sources, weaving a tapestry of individual experiences and large-scale military set-pieces.

The German War is an important scholarly achievement in the field of modern German history, and it is written with an epic narrative sweep.