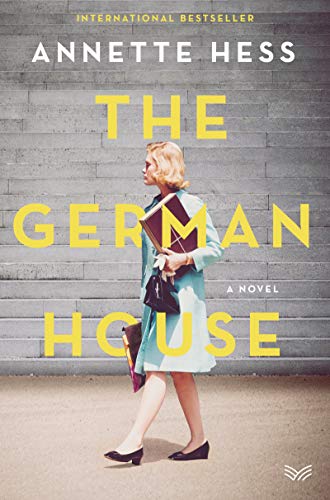 “Although frequently painful to read, The German House is a condemnation of the Nazi past, but also an exploration of survivors’ guilt, as well as families in conflict.”

Both a family saga and a courtroom drama, Annette Hess’s debut novel, The German House, exposes long hidden secrets from the Nazi past that participants thought buried in the ashes of the Third Reich. Like a phoenix rising, those secrets are painfully resurrected to tear apart lives and families during the Frankfurt War Criminal trials of 1963, and compelling survivors to confront the consequences of past actions.

Eva Bruhn, a young translator living in Frankfort, has little to worry about other than the first meeting between her rich future husband, Jurgen Schoormann, and her parents, Ludwig and Edith Bruhn. There was also her anxiety about when Jurgen will ask Ludwig for his daughter in marriage.

“Eva was struck by the realization that nothing would ever convince her parents of Jurgen’s ability to make her happy. Not even his money.”

She is the younger daughter of Ludwig Bruhn, owner of The German House, a restaurant on a not very prestigious street. Jurgen is the only son of the very wealthy founder of the largest mail order business in Germany.

Jurgen lives in a mansion on the outskirts of Frankfurt. Eva lives in a flat above the restaurant with her parents, her overweight and unattractive sister, Annegret, and her much younger brother, Stefan.

Eva’s mother is hostess and waitress when needed at the family business. Annegret is a nurse at the local hospital caring for newborn infants. Stefan is, well, spoiled and mischievous.

Such a disparity exists between the Bruhn family and the Schoormann family that Eva wonders if it can be bridged. As she waits for Jurgen’s arrival she wonders if he will came at all.

“He’s not coming. He reconsidered. He’ll call tomorrow and tell me we aren’t a good match.”

Jurgen does arrive, meets her family, and as her jovial, imposing father serves the roast goose, Eva sees Jurgen looking over their apartment.

“He eyed the worn sofa and yellow checked blanket her mother had arranged over a tear in the upholstery. She also crocheted a small coverlet for the left armrest.”

Eva is furious and wishes Jurgen were more understanding. “He had to see how hard her parents were trying, how good they were, how endearing.”

For her part, Edith is apprehensive about Jurgen. “I have to be honest, child, I can’t help it. He will not make you happy.”

When the phone rings and Eva is called to work, she sees that Jurgen seems comfortable visiting with father, and she will probably be gone no longer than an hour—probably something to do with a civil suit for damages caused by faulty engine parts from Poland.

Her job has nothing to do with a civil suit or faulty engine parts. She is to translate statements of Polish survivors of Auschwitz. The first man whose testimony she translates is Josef Gabor, a Polish Jew, who testifies to witnessing a test of the deadly gas later used for mass executions.

“When we opened the doors, some of the prisoners were still alive. About one third. It had been too little gas. The procedure was repeated with double the amount.”

Eva is stunned by what she hears, and confides to one of the investigators, David Miller, an American she thinks, that “It was absolutely horrible, what that man was—”

David Miller’s reaction is fierce. “You all think that the little brown men landed their spaceship in ’33. Am I right? Then off again they went in ’45, after forcing this fascism thing on you poor Germans . . . Do you what you Germans did?! Do you know what you did?!!”

Eva leaps out of Miller’s car and walks the rest of the way home, thinking that “That driver, or whatever he is, isn’t mentally stable.”

As the date for the War Crimes trial draws closer, and Eva translates more testimony for the prosecutor, she becomes more and more sickened by what she hears: trainloads of Jewish prisoners, stuffed into cattle cars, separation for families who never see one another again, beatings, torture, murders, medical experiments, gas chambers, huge ovens, and ashes and half-burned bodies, remains shoveled into mass graves.

Jurgen forbids her to work for the prosecutor anymore, and her family also begs her to stop. Her sister, Annagret, declares the testimony is “all myths.”

Eva knows that what she is translating everyday are not myths, but the horrible truth of what the Nazis did to the Jews, to prisoners of war, to gypsies, to anyone they deemed unworthy or inferior.

Other events push Eva toward questioning everything she though she knew about other Germans, about her parents. Why do Ludwig and Edith never speak of the war? Surely they must know—or at least heard rumors—of the horrible death camps like Auschwitz.

Against the orders of Jurgen and his interference, and her parents increasing desperate pleas, Eva continues with her work. She must know if half-remembered, childish memories are real, or just false images conjured up by nightmares. If they are false images, why does she recognize the wife of the trial’s principal defendant, called “the Beast” by survivors?

This is one of the most compelling novels about the Frankfurt Trials of 1963, when Germany must once again confront its past, and attempt to justify its individual reasons for doing nothing when so many could smell the greasy smoke coming from the smokestacks of the crematoriums.

Based on the actual testimony at the Frankfurt trials, The German House is compulsive reading, both for the historical account, but also for three-dimensional characters who confront their own flaws, as well as the atrocities of the past.

One wishes that Eva’s sister, Annegret, had suffered her own punishment for the atrocities she commits, but perhaps Ms. Hess is using Annegret’s mental disorder to illustrate the attempts of some Germans who claim they were helpless to stop the Nazis, but can still be good people. The fact that Annegret must first hurt before she can heal her victims is a profound statement of the dichotomy of thought, a twisted re-enactment of the relationship between perpetrator and victim.

Although frequently painful to read, The German House is a condemnation of the Nazi past, but also an exploration of survivors’ guilt, as well as families in conflict.