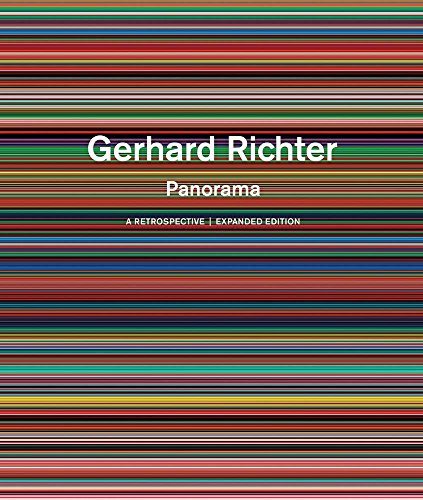 Gerhard Richter is a painter. In the contemporary art scene, the role of “painter” has given way to the catch-all term “artist.” Today artists use media as diverse as video, photography, and performance to express a specific aesthetic practice. To be a painter seems like an archaic role destined for obsolescence. But painting will not be replaced by newer technologies and media the same way print is not dead. Painting is very much alive as evidenced in Gerhard Richter: Panorama: A Retrospective: Expanded Edition. The book focuses on a 2011 Gerhard Richter retrospective held at the Tate Modern. To the uninitiated, Gerhard Richter “is the most complete overview of the artist’s entire career to date.”

Edited by Mark Godfrey and Nicholas Serota, Gerhard Richter brings together hundreds of his works, several critical essays, an interview with Richter, and a comprehensive chronology. Yet Richter is not necessarily obscure or esoteric, since the band Sonic Youth used the 1982 painting Candle [Kerze] (CR: 511-3) for their epochal double-album Daydream Nation.

But before engaging with the intersection of fine art and pop culture, Richter’s background needs to be understood. His personal story is reflected in his artwork and his negotiations with time, memory, history, and politics.

Born February 9, 1932, in Dresden, he grew up in East Germany, attaining admittance to the Dresden Art Academy in 1951 after working as a sign painter and factory worker. He later transfers to Staatliche Kunstakademie Düsseldorf in 1961 shortly before the construction of the Berlin Wall. He becomes a citizen of West Germany. Richter’s biography reads like a Germany’s tumultuous history in miniature.

Dresden will later come back to haunt his later works, profound meditations on history and erasure. He will also become a critic of West German consumer culture, but not from the perspective of the New Left. His later sequence of monumental paints on the Baader-Meinhof Gang will cause ideological tension between Richter and his contemporaries.

In terms of technique, Richter remains enigmatic and prolific. His paintings range from blurry yet realistic still lifes to color charts and abstract “squeegee paintings” to his glass pane sculptures. The analytical essays by several art professors and curators help decode his artistic output. He rides the fine line between representational and non-representational painting. These include his paintings sourced from family photographs. These paintings are photo-realistic but are visually blurry to the observer. This practice mirrors Germany’s own attempts to blur or erase its past.

When not seen as historical commentary, Richter’s work exposes the mechanics of painting itself. The most famous example is Stroke (on Red) [Strich (auf Rot)] (CR: 452) from 1980. A single brushstroke, in this case yellow paint on a red background, is magnified and then turned into an epic mural. The final “painting” is 190 cm by 2000 cm. It is a “painting” and not a painting, since the original painting was blown up, sketched out, and painted again.

As Camille Morineau explains in her essay, “The Blow-Up, Primary Colours and Duplications,” that “At a distance, the stroke appears as a coloured line. Close up, the single line disintegrates into droplets of paint. The line appears now as a kind of veil of colour.” In Stroke (on Red) Richter exposes the fault lines between process and classification.

The contemporary art world can seem off-putting at time, alienating, or needlessly obscure. (The jargon-laden prose in exhibit labels does the museum visitor no favors either.) Gerhard Richter: Panorama offers a means to delve into the artistic practice of an iconic figure in modern European art. That doesn’t mean it will be easy. Some essays will take great effort to slog through, but will offer the rewards of understanding Richter’s life and work. Mr. Godfrey and Mr. Serota have marshaled together an impressive array of intellectual talent for the task. They make wanting to comprehend Richter’s massive oeuvre a wonderful invitation.