Genius illustrated: The Life and Art of Alex Toth 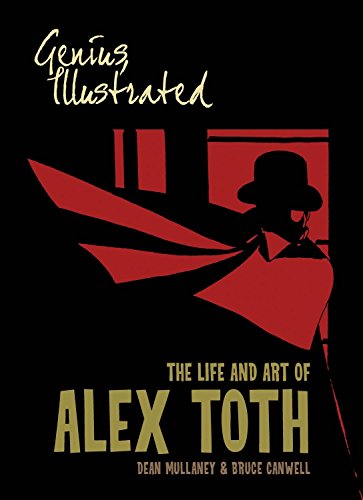 “Genius Illustrated is a high-water mark in the field of comic artist biography.”

Nearly 40 years after Alex Toth’s artwork first appeared in comic books he can still produce gasps and awe from fans and artists everywhere.

In 1996 he created the cover art for Batman Black and White #4. Many consider that image of Batman swinging across a full moon one of the most iconic images of the hero from that decade. The balance of darkness and light is a perfect example of Toth’s brilliance.

Genius illustrated: The Life and Art of Alex Toth is the second volume in a planned three-volume biography of his life and work. Covering the work he created in the late fifties until he passed away in 2006, the book incorporates Toth’s art and his life, reminding us that both were one and the same.

Interweaving straight biography with a stunning amount of Toth’s original artwork, this oversized volume holds stories and photographs from his children, friends, and those who worked with him over the years.

As beloved and admired as he was by others, it was Toth’s love of art and the comic medium that consumed him. Divorced from his third wife he would arrive to pick up his children for an afternoon out and spend three hours talking with his ex-wife about what he was working on.

Authors Dean Mullaney and Bruce Canwell have included a tremendous amount of original art, much of it never seen before, that reminds us of why Toth is so respected and revered.

The artist’s skill with a simple pen, his ability to fill shadows, his nearly unequaled ability to showcase action, all coupled with his own sense of perspective place the artist among the greatest to have ever drawn for comics.

When it came to comic art and storytelling Toth had definite opinions and had no fear of expressing them. One example of his drive to perfection is two pages of original pencils he drew for the DC title Rip Hunter . . . Time Master #6 (FEB 1962). They also highlight his unwillingness to let second rate art or storytelling slip through.

Toth took it upon himself to change a few panels and includes a note at the bottom of page five to explain why. He says that “the script had too many ‘planted items’ ” and “It has already been established by preceding panels that they are, and have been trailing and observing . . .” The emphases are Toth’s. He was not one to let subpar work bear his name. No matter who wrote or edited it.

This inability to adhere to certain story structure reappears throughout his remaining years. He didn’t care who he sent notes to. And that included the legendary Stan Lee.

In the seventies Toth received a story idea from Marvel for the character Black Panther. At the time Roy Thomas was a well respected editor at the publisher, and Lee was still plotting stories for Marvel titles.

Even though Thomas had made it clear that what Toth received wasn’t more than an outline of a story, Toth still had problems with the outline. As retold by Thomas, “A week later Stan (Lee) and I received a handwritten diatribe from Toth that began ‘IS THIS YOUR CORPORATE IDEA OF A PLOT?’” The notes went on from there. Thomas does not remember replying to Toth’s suggestions.

While he could be combative in the desire to be as good as possible, no one ever doubted his skill. Genius Illustrated is filled with fine examples of how his craft grew over the years.

A splash page from House of Secrets #63 (November 1963) featuring the DC villain Eclipso is one of the most convincing versions of a character’s transformation from good into evil ever seen in comics.

As the good host Bruce Gordon falls backward his evil twin Eclipso literally vibrates forward from his body. As drawn by Toth the page literally shakes as you can feel the physical toll that the release of Eclipso takes on Gordon. Toth creates a scene of pure human suffering matched by the explosion of evil from his soul.

Examining his model sheets for characters from animation such as Space Ghost or Jonny Quest you are amazed at the sense of the depth he brings to their initial characterizations. His work is so detailed that the model sheets serve as guidelines for later artists. By the time we see the aforementioned cover to Batman Black and White #4, you can’t help but to be in awe at how much Toth could do with his pen.

As written by Mr. Mullaney and Mr. Canwell, Genius Illustrated is a high-water mark in the field of comic artist biography. From the amazingly clear and detailed art they chose to feature to the way the authors never shy away from the more difficult times faced by Toth during his career and life, they have matched their subject’s drive for perfection.