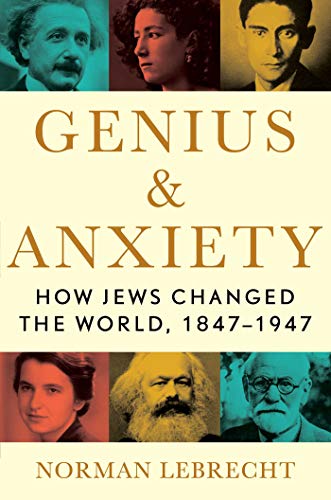 “This book shines a light upon the contributions of one remarkable culture, without which our world would appear very different today.”

Among the plethora of books about Jewish history, Genius & Anxiety shines as a beacon of deeply researched historical accuracy. This intensely absorbing chronicle of notable Jews who changed the world in positive, meaningful ways will stand the test of time and investigation.

The reader is carried through the vast text as though the author were a close friend assembling an armada of material and evidence. Norman Lebrecht enables the reader to see what most others cannot—to feel what they cannot. He explores how uniquely Jewish characteristics, within the chasm of anti-Semitism, enable noteworthy Jewish figures to see what others could not.

While this marvelous text must certainly become a standard university textbook, filled with detailed and profound data, it also reads like novel, evocative and exciting. The author becomes your friendly, knowledgeable tour guide to history. Through the author’s depth of inquiry into these historical Jewish figures, we come to value their individual and collective contributions. Because of them, the world will never again be the same.

It’s truly amazing that any of these unforgettable Jewish writers, artists, engineers, physicians, teachers, and politicians can accomplish anything at all, considering the world around them is filled with malevolence and mendacity toward Jews. In every nation, on every continent, Jews are despised, despite the fact that Jews rarely broke a law, committed a crime or performed acts of civil disobedience.

The world’s inhabitants never required a reason to hate Jews. Anti-Semitism came naturally to Gentiles, taught generation to generation by parents who proffered all sorts of illusory reasons to detest Jews. The fact that Jews survived at all seems miraculous, let alone that they performed acts that enriched and lifted up humanity.

Jews made every society better through the arts, medicine, science, engineering, philosophy, finance, education, politics, and government. Yet they remained despised throughout history because of a litany of rumors and lies about them, espoused by national heroes like Hitler, Charles Lindbergh, and Henry Ford. It’s so easy to hate—so difficult to tolerate.

This book is a celebration of Jewish genius within a century of increasing anti-Semitism. It reveals in detail the successes of Proust, Freud, and Einstein. It also provides similar examples from people whose names are not upon the fingertips of historians. Their contributions nevertheless are of value in our daily lives. This is made all together timely by a disturbing increase in acts of anti-Semitism everywhere.

In every generation, dating many centuries, Jews have faced an existential threat from the societies in which they live. They are pressured to assimilate, but then despised for it. They represent a tiny percentage of the world’s population, but have accomplished a mammoth share of new, successful knowledge in science, medicine, politics, art, and engineering.

Genius & Anxiety proffers the path of Jews in shaping the world we live in today. From Mendelssohn to the creation of the State of Israel, author Lebrecht delivers a detailed account of many famous and successful Jews and many others less famous. He reveals how uniquely Jewish circumstances enabled otherwise normal people to display uncommon ingenuity and success. Yet the cultural context of this genius has gone largely unnoticed.

From communism to the blues and from operas to the theory of relativity, Jews changed the world profoundly in this century. Their mental acuity and passion have largely shaped the world we live in today. Yet, in virtually every case, the magnificent quality of their genius and effort to improve humanity has been buried under centuries of anti-Jewish hatred. That loathing remains today. And this repugnance has changed the Jews as well.

Genius & Anxiety builds to a crescendo of Jewish exceptionalism. Lebrecht describes how Jewish circumstances have enabled otherwise ordinary people to display uncommon imagination and resourcefulness in the face of a problem, resulting in some of the most significant advances in modern history. His writing, references and personal contacts are brilliant. This book shines a light upon the contributions of one remarkable culture, without which our world would appear very different today.