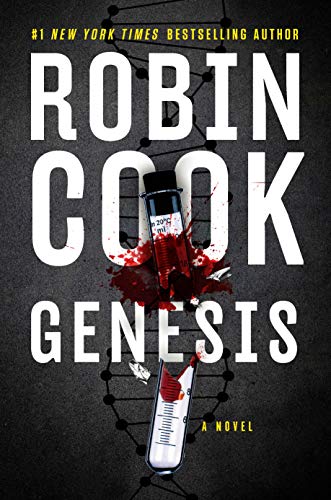 “With the added components of mystery and suspense, this in-depth thriller is sure to keep one gasping.”

Once again, Robin Cook, the mastermind of medical suspense, presents the reader with a spine-tingling read in Genesis.

New York City's Chief Medical Examiner Dr. Laurie Montgomery is not surprised to receive a victim of another overdose, yet when 28-year-old woman lands on the autopsy table, she takes notice. The deceased, Kera Jacobsen, a social worker, does not display evidence of being a drug user, and her post-mortem is atypical. Kera, a recent California transplant attained sought-after employment at the NYU Langone Medical Center with a high recommendation. So why is she now dead?

Dr. Montgomery loves her stressful position as well as her colleague husband, Jack Stapleton and her two children, nine-and-a-half-year-old JJ, who is going through somewhat of a rough patch at school; his counselor wants him tested for ADHD. Then four-year-old daughter, Emma, with a diagnosis of autism, also brings challenges. Yet Laurie wouldn't trade her life for anything else.

Laurie is now receiving complaints about a fourth-year anatomical pathology resident named Dr. Aria Nichols. Several medical examiners and technicians state the young woman is brazen and overly offensive and often refuses to complete her duties. Because of her arrogance, Laurie takes her under her wing hoping to change her attitude. She assigns her to help with performing an autopsy, something Laurie has missed doing because of her other responsibilities. Kera Jacobsen happens to be the one she wants Aria's assistance with strict orders from Kera's employers to keep the results quiet.

During the procedure, Laurie gives Aria free rein at the dissection and finds her to be quite talented, though very abrasive. She has a no-holds-barred demeanor and speaks her mind without considering whom she's speaking to. Though she is off-putting, Laurie feels she is very intelligent and would like to mentor her to become a pathologist, a specialty Aria has no fondness for.

As they discuss the case, Aria brings up many questions as to Kera's death. Neither she nor Laurie believes Kera had been a drug user, and Aria, with a twisted viewpoint gained by her unhealthy upbringing and distaste for men, has a strong sense that Kera's passing is a murder. She relays her assumptions to Laurie then asks permission to delve deeper into the case—to talk to Kera's friends, neighbors, colleagues, etc., for she strongly believes she was deliberately slain, especially when the autopsy reveals a 10-week-old fetus.

Aria is determined to prove she is accurate in her assessment of Kera's demise and goes to all lengths to gain the information she needs, to the point where she becomes obnoxious. She confers with Kera's best friend Madison who turns her on to the idea of searching through DNA to locate the father of the fetus. Though they are due to meet for Aria to get more input, Madison has a bizarre accident when she falls into the train tracks. Miraculously she survives, and Aria goes to visit her in the hospital.

"'Dr. Nichols!' a voice called out, catching Aria off guard as she was debating whether to attempt to talk with Madison or just leave. Turning in the direction of the voice, Aria saw Dr. Henderson coming in her direction, dragging the mob boss with him. If she could have fled, she would have, but there wasn't time.

"'What a coincidence,' Carl said, crowding close enough to Aria so that she could smell his coffee breath. 'I was just talking about you to our president five minutes ago. Vernon, this is Dr. Aria Nichols, who was involved with the autopsy on Kera Jacobsen. Remember, you asked me for her number?'

"'Of course, I remember,' Vernon said with the mild irritation of a man under stress. He stuck out his hand, which Aria shook against her better judgment. She had an instantaneous dislike for Vernon and his dark beady eyes. To her, he seemed inappropriately cast as a hospital president.

"'The administration wants to thank you for your understanding of the sensitivity of the Jacobsen tragedy,' Vernon said. Aria nodded. At least the man had a commanding voice. 'We hope you will not draw any more attention to it since we're still concerned it could adversely affect our medical center, especially now with this new, supposedly newsworthy event that is indirectly associated. As you are well aware, we much prefer to stay out of the tabloids.'

"Aria chose not to answer, which created an uncomfortable moment."

Though Aria may be deemed obstinate and loathsome, Laurie is impressed with her tenaciousness in searching for the truth. However, the truth is something that can cause her and Laurie great danger.

Genesis is a complex, highly entertaining novel filled with metaphors and similes that add graphic details, giving insight into the medical field of pathology, leaving the reader with knowledge a layperson might not have. With the added components of mystery and suspense, this in-depth thriller is sure to keep one gasping.