Gathering Blossoms Under Fire: The Journals of Alice Walker, 1965–2000 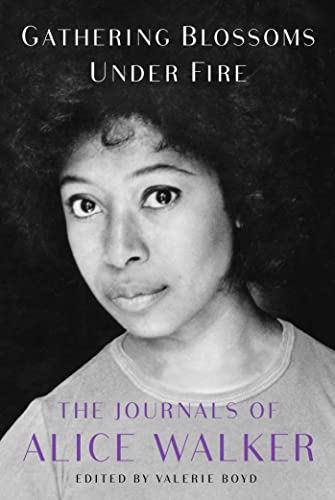 In 1982, at the age of 38, Alice Walker’s life pivoted dramatically and irrevocably with the publication of The Color Purple, her third published novel that was awarded the Pulitzer Prize and that director Stephen Spielberg brought to the big screen in 1985. Soon nearly every person of a certain persuasion began to wear a T-shirt, a scarf, or a dress the color purple.

Walker has published several novels since The Color Purple, including The Temple of My Familiar, though none of them have been as commercially successful, or as beloved by readers, a fact that has not been lost on the author herself.

“I want a year of not being ‘Alice Walker,’” she wrote in her journal on June 10, 1994. That no longer seems possible, especially not with the publication of her new book in which “Alice Walker’ is front and center.

The title of her novels, the collections of her short stories, including “The Way Forward is With a Broken Heart,” and her volumes of poetry such as Horses Make a Landscape More Beautiful, often contain ideas couched as images.

Much the same is true for Gathering Blossoms Under Fire. It’s beauty that Walker is after: beauty in a world that’s broken, ravaged, scorched, or bombed. Her aim has been to uplift readers.

Walker’s latest book offers selections from her journals from 1965, when she was an undergraduate at Sarah Lawrence University, to 2000, not long after she was arrested in a protest against the war in Iraq, outside the White House and in the company of fellow writers including Maxine Hong Kingston and Terry Tempest Williams.

Valerie Boyd has edited this volume, culled from Walker’s journal. The author of Wrapped in Rainbows: The Life of Zora Neale Hurston, and a writer in residence at the University of Georgia, Boyd provides an introduction in which she explains that much of Walker’s material is housed at Emory University in Atlanta and is “embargoed from the curious eyes of scholars, journalists and fans until 2040.”

Should Walker live that long—she would be 96. Not an impossibility. Then, scholars, journalists and fans will have the opportunity to find out what has been omitted.

In addition to her Introduction, Boyd provides dozens of footnotes packed with vital information that help explicate the text itself.

She and Walker are clearly on the same page.

Curious readers will find a great deal of information about Walker and her work in Gathering Blossoms Under Fire. The author writes at length about The Color Purple, which, in her handling and under her gaze, emerges as a far more complex novel than it might initially seem.

Walker describes her marriage to a white Jewish lawyer named Mel Leventhal, who was her one and only husband, her romance with Black scholar Robert Allen, and her love affair with singer/songwriter Tracy Chapman. Plus there’s Walker’s volatile relationship to her own daughter, Rebecca.

The author can’t help but use the first-person pronoun, “I,” as when she candidly observes, “I want to do good in the world,” and “Why do I keep trying to figure out what's wrong with me?” Walker also seems to be uncomfortable with “I” and with personal revelations. From time to time she falls back on, “Moi,” the French word for me, which seems to be meant as an exercise in modesty.

Still, Gathering Blossoms tells Walker’s own story from the inside out and with no end of personal revelations about matters spiritual, sexual, and political.

What might surprise readers who are familiar with Walker’s work is her restlessness and her ambiguities.

Though she goes on book tours and fiercely promotes her work, she also explains that she grows weary of fame and wants to isolate herself on the remote land she owns in Mendocino County, several hours north of San Francisco where she wrote The Color Purple, and where she grows vegetables, meditates, and entertains friends like Gloria Steinem of Ms. magazine fame.

Gathering Blossoms Under Fire recounts Walker’s emergence as a “womanist.” That word is her own and reflects her sense of herself as both Black and a feminist, a Black feminist, who reveals that she is sometimes uncomfortable in the white, middle-class feminist movement.

She is also a kind of Africanist. Parts of The Color Purple take place in a fictionalized Africa. Walker has campaigned loudly and clearly against the traditional tribal custom in some African nations of performing clitoridictomies on young Black women.

Walker shows how she made the campaign against “female genital mutilation” her own cause, her writing on the subject in Warrior Marks, and her collaboration with filmmaker Pratibha Parmar.

Gathering Blossoms Under Fire looks backward. That’s not surprising since Walker glances over her shoulder and at her past. The book also feels like it belongs to history: to a time before Black Lives Matter and the #MeToo Movement.

In a blurb for Gathering Blossoms, Honorée Fanonne Jeffers, the author of The Love Songs of W. E. B. Du Bois, writes, “Those who know Alice Walker’s body of work know that she inspired a generation of Black women writers who continue to impact America’s literary landscape. And didn’t so many of us read Walker to understand how to survive this place, to fight to become whole, to pull self-love to our fleshy, dark selves?”

Gathering Blossoms Under Fire is for the sisters who came of age and came out because The Color Purple celebrates the love between women. It's also for brothers, fathers, and sons eager to find beauty in flowers, in horses, and in their own hearts.

Gathering Blossoms Under Fire might be the book that Walker fans have been waiting for for a long time.