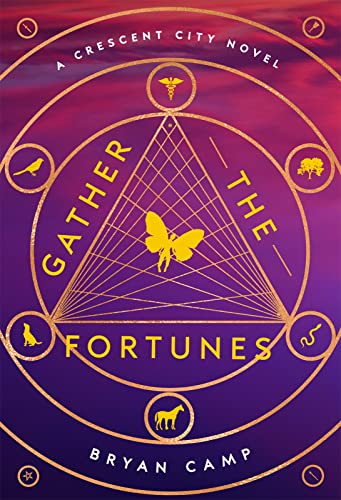 “The scope of Camp’s mythological knowledge continues to be impressive, even as he builds a cosmos that is distinctly his own.”

Most fantasy series follow the same protagonist or ensemble through each book, but Bryan Camp’s Gather the Fortunes is a sequel more on the model of a romance series, shifting sideways from Jude Dubuisson, the main character of The City of Lost Fortunes, to Renaissance Raines, the murder victim whose death was more the start of her story than its ending. Now she is a psychopomp, tasked with carrying out the complex post-processing required for the dead in Camp’s world.

It’s a lonely afterlife for Renai, whose liminal state—alive again, sort of, but not completely—cuts her off from her family and any meaningful interaction with the living. This situation, combined with the structure of the novel’s plot, means that Gather the Fortunes gets off to a slower start than its predecessor.

A strange man asks a non-binding favor of her, to take care of Ramses St. Cyr, a boy slated to die soon. Ramses goes missing from his own death, and Renai spends much of the book trying to find him, while her very small number of allies withhold more information than they provide.

Although the plot initially lacks the same forward drive as the murder mystery and supernatural poker game of The City of Lost Fortunes, it shifts into higher gear once the full nature of Renai’s situation becomes more apparent. And both before and after that point, it’s a pleasure to watch the world and characters of the series expand beyond their original presentation.

Jude Dubuisson appears here, grown and changed from who he was in the first book, and New Orleans itself remains a vivid component of the story. Hurricane Katrina is further in the past in this volume, but still not forgotten, and the novel takes the reader to new parts of the city—many of which don’t feature in the usual tourist experience, such as Orleans Parish Prison.

Camp remains aware of and interested in the racial aspects of his story. Renai is a black woman, and Ramses St. Cyr is a black boy; the unequal justice, opportunties, and rights afforded to African Americans in New Orleans (and, by extension, in the entire United States) are a constant thread in the narrative. This reaches even beyond the mortal world: Renai is unafraid to call out injustice in the afterlife as well, a system that mechanically processes the different parts of a person’s soul and seems to not care if some fall by the wayside in their journey to their ultimate punishment or reward.

The scope of Camp’s mythological knowledge continues to be impressive, even as he builds a cosmos that is distinctly his own. The sections of omniscient narration that muse on recurrent tropes in sacred narratives range across the entire world, touching not just on familiar staples like Egyptian, Greco-Roman, and Norse mythology, nor even Japanese and Hindu beliefs, but gods and creatures from places as far-flung as Mongolia and the Incan Empire, without erasing the specific details of those cultures.

Meanwhile, his home-grown cosmology with its tripartite division of soul into its Fortune, Voice, and Essence and series of tests in the afterlife offers him rich opportunity to develop his series. The characters’ field trip in this novel to what lies below the lowest layer of the underworld is especially fascinating.

Two books are not nearly enough to fully explore this complex world, both mundane and mythic, and the characters’ role in it. The Crescent City series is wonderful urban fantasy for readers tired of the usual parade of vampires and werewolves, and New Orleans deserves as much narrative attention and love as New York. That love shines through here.