Gates of Stone (A Lord of the Islands Novel) 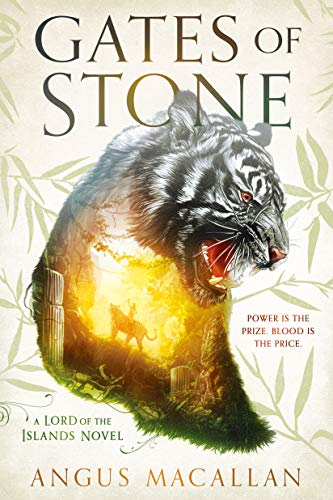 “Starting with sex and murder, Gates of Stone fires off like a cannon into a rollercoaster actionfest that keeps the pages turning well into the night long after the reader should go to bed.”

With Game of Thrones drawing to a close, many fans begin to look for the next Big Thing in the world of fantasy. Something to sink their teeth into for a wild ride as they whirl through a world not their own, but wish it was. Gates of Stone is such a book, the world of the Laut Besar just that kind of place needed for the next generation of fantasy enthusiasts.

Publicized as a rich fantasy with an Asian flair doesn’t do the book justice, sort of like calling The Lord of the Rings a work with Anglo Saxon flavoring. Starting with sex and murder, Gates of Stone fires off like a cannon into a rollercoaster actionfest that keeps the pages turning well into the night long after the reader should go to bed.

The plot, modest as it may sound, carries more with it than just the usual quest fantasy trope: A woman kills her husband, motivated by the desire of empire, while a young prince’s world is turned upside down thanks to the ruthless ambition of an evil mage bent on destroying the world. Simple, right? That’s just the beginning of the book.

“I can look into people’s faces and see their future,” Semar said.

Jun frowned at him.

“I am rarely wrong,” said Semar. By some trick, some combination of bright sun coming off the sea and the shadows thrown by the trees, his eyes now seemed to be entirely black, the white swallowed up by the iris and pupil.

And although there is plenty of action, there are well-crafted characters to leaven an otherwise exhausting read, from the ambitious and somewhat bitter Princess Katerina to Jun, a spoiled princeling who must grow up a lot faster than he would have liked. Not to mention the Sorcerer Mangku, the new villain on the block for the reader to hate. And although these are three main characters, there are a plethora of well-written supporting characters to keep the book from being one-note, which elevates it to the next level of fantasy writing.

There is enough between the covers of this book to leave any fan of Edgar Rice Burroughs and James Clavell anxiously waiting for a sequel.