The Gatekeepers: How the White House Chiefs of Staff Define Every Presidency 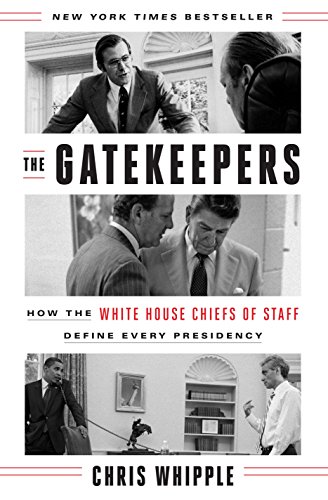 “Javelin catcher, confidant, consigliere, battlefield commander.” These are some common roles undertaken by the White House Chief of Staff. The position usually involves being out of the spotlight. A typical response to the question, “Who is the current White House Chief of Staff?” is another question, “What’s a Chief of Staff?” Except for political junkies and fans of shows like The West Wing, House of Cards, and Madame Secretary, it is a position unknown or misunderstood.

Chris Whipple seeks to demystify this otherwise anonymous yet powerful White House office. Whipple is a documentary filmmaker, writer, journalist, and speaker. He has won Emmy and Peabody Awards for his work as producer for CBS’s 60 Minutes and ABC’s Primetime. His extensive background in journalism makes the book an easy, accessible read. Think of it as a very long New York Times Magazine feature article.

During the creation of this book, Whipple had the opportunity to interview 17 former chiefs and two former presidents. This book isn’t as in-depth and extensive as a Robert Caro biography or as jargon-laden as an academic work in political science. Where The Gatekeepers excels is as a work accessing the major players who occupied the office. It opens the door to the Oval Office and reveals the how the chief of staff handles his everyday tasks. (Except for a couple examples on TV, the chief of staff has been a man.) Almost every former chief has said it is the hardest job in Washington, but has also said he wouldn’t want any other job. It is a job with a herculean task load yet it is incredibly rewarding.

Whipple begins the book with a short historical survey of how the office of the Chief of Staff developed. Throughout history the president has had an array of personal secretaries and advisers. Truman hired John Steelman as the first chief of staff. Sherman Adams, Eisenhower’s chief of staff, became the earliest embodiment of the position, expanding the mandate from being simply a glorified personal assistant. In Whipple’s telling, H. R. Haldeman, with his corporate background, symbolized the first modern chief of staff. He was the president’s “son of a bitch” and “the lord high executioner.”

Even though the President of the United States commands awe-inspiring power and has the ability to change history, he is not an Egyptian Pharaoh or God Emperor of Dune. As Whipple recounts, “‘Poor Ike!’ his predecessor Harry Truman had quipped upon Eisenhower’s election. ‘He’ll sit here and he’ll say, “Do this! Do that!” And nothing will happen! It won’t be a bit like the Army.” (Italics in original.)

Throughout the book Whipple contrasts successful and unsuccessful chiefs with the successes and failures of the presidents they advise. Successful chiefs include the aforementioned H. R. Haldeman, James Baker III, and Leon Panetta. A successful chief, regardless of partisan affiliation, must excel at these tasks in order to avoid disaster: understand the mores of Washington, placate the Cabinet heads, finesse politics and policy, keep amicable relations with Congress and the Supreme Court, not anger the First Lady, and be able to say “No,” to the president.

Any chief must have the nuance and delicacy of a diplomat and the tenacity of an attack dog. A chief must also be smart, not necessarily intelligent. John Sununu became fodder for Saturday Night Live because of his scandalous behavior. Sununu, in addition to being a former governor of New Hampshire, “had a PhD from MIT and was a member of the Mega Society, an obscure high-IQ organization.” His hyper-intelligence didn’t stop from acting like an idiot in his position as chief for President George H. W. Bush. His abuse of power included using a White House limousine to attend a stamp auction in New York City.

The theme of intelligence is also echoed with the president. Franklin Delano Roosevelt had a second-class mind but a first class temperament. Whipple recounts Jimmy Carter’s disastrous presidency. In addition to the events swirling around him, he refused to have a powerful chief of staff. Instead he chose to see whoever he wanted without the chief acting as a filter. This led to time management issues and snowballing crises.

When the chief restricts access to the president, it is not simply a power game. One of the president’s most valuable assets is time. How the president uses his time is especially important in long-term projects like crafting legislation and orchestrating foreign policy moves. Misused time will misuse political capital. Once it is lost, it is incredibly difficult to recapture. With a limit of two terms, every minute counts towards whatever goals the president seeks to achieve.

The book went to press shortly after Trump became president. Written on December 6, 2016, Whipple remains optimistic about the role of the chief of staff. But as recent events in this ongoing farce of a presidency have shown, Trump’s chief of staff Reince Priebus is taking a backseat role. Shoved aside by White House Counselor Steve Bannon, this has led to the ill-conceived (and poorly drafted) “Muslim ban” executive order, among other acts of cosmic ineptitude.

The Gatekeepers is an illuminating chronicle of the monumental burdens shouldered by the White House Chief of Staff. It also shows the triumphs garnered by chiefs who were able to restrain the president, brave enough to say no, thus saving the republic from disgrace and disaster.