A Gate at the Stairs (Vintage Contemporaries) 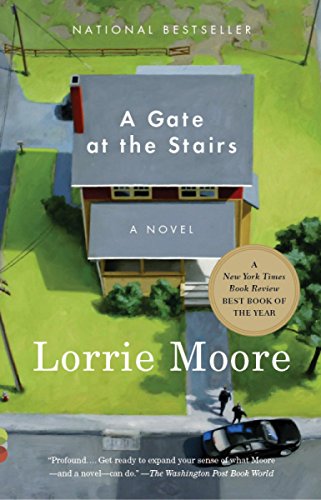 I must begin by declaring a huge appreciation of Lorrie Moore’s writing, impatiently waiting for her to produce another book since the publication of Birds of America in 1998. Her new, much anticipated novel, A Gate at the Stairs, however, was somewhat disappointing. Ironically, the qualities that typically contribute to the brilliance of her work—her lucid, witty, crisp prose, her profound character development, and her examination of contemporary issues—don’t work in this novel.

A Gate at the Stairs is narrated by Tassie Keltjin, a college student in a Midwestern town, who takes on a part-time job as a nanny for a Yuppie couple who are adopting a biracial child. This already compelling, highly dramatic story takes place shortly after 9/11 and is compounded by Tassie’s involvement with a suspicious boyfriend with a mysterious background and a brother who opts to join the American military and ends up in Afghanistan.

The nanny/adoption story is beautifully developed in its examination of family dynamics, marital tensions, and racism. That part of the plot would have made an outstanding novel in and of itself. The 9/11 and war-related stories overwhelm the novel and detract from the strongest part of the book. These post 9/11 sections are also not as well developed or believable as the core of the novel. For instance, it’s hard to buy that clever, astute Tassie would fall for a “Brazilian” boy who knows nothing about Brazil and whose little “Portuguese” consists of Spanish song lyrics. Her extreme reaction to her brother’s fate is also not very convincing, especially since her relationship with him is never well developed.

Moore’s perfectly crafted, sharp prose is a pleasure to read and often laugh-out-loud funny. But this too backfires here because Tassie, a naïve, Midwestern farm girl, sounds exactly like Lorrie Moore or one of Moore’s omniscient, third-person narrators. Also, most of the other characters, from the smart, seemingly-worldly Sarah, the adoptive mother, to Tassie’s pseudo-Brazilian boyfriend and her small-town teen-aged brother, Robert—all exchange perfectly constructed, witty banter. They all sound alike.

This reviewer wished she loved this book—but didn’t. Unfortunately, it lacks the tight structure of Moore’s short stories and novella, Who Will Run the Frog Hospital? Despite its flaws, A Gate at the Stairs is hard to put down. Moore’s writing is a joy to read. The novel is beautifully written, smart, funny, and deeply disturbing.