Gastrophysics: The New Science of Eating 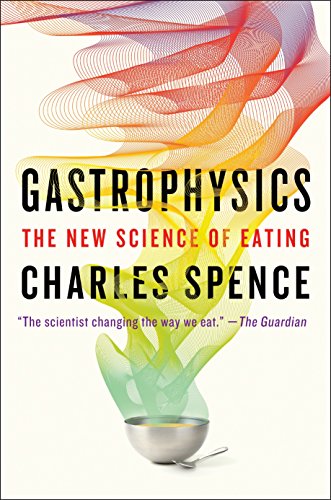 “This looks delicious,” we say. But never, “This is going to taste great.” Why does sight influence taste so profoundly? Why is airplane food universally bad, and why is tomato juice the most popular in-flight beverage when those who ask for it almost never drink it at home? In answering questions you would never have thought to ask, Charles Spence reveals how eating and taste have everything to do with the brain and almost nothing to do with the tongue.

Gastrophysics: The New Science of Eating makes readers look at their plate with fresh eyes. Gastrophysics—a merger of “gastronomy,” or fine dining, and “psychophysics,” the study of perception—is “the scientific study of those factors that influence our multisensory experience while tasting food and drink.”

And what an influence they turn out to be, from the color of a mug and shape of a plate to background music, lighting, and the heft of tableware—in short, everything not on the plate including what we see, smell, touch, and hear, as well as whom we eat with, when, where, and in what setting.

Charles Spence heads the Crossmodal Research Laboratory at Oxford University. Crossmodal refers to when events in one sense influence what we perceive in another. Spence is a scientific advisor for some of the world’s top food and beverage companies. The Perfect Meal, first reviewed her in NYJB, won the 2015 Popular Science Prose Award.

Gastrophysics is equally entertaining. In it he tells us exactly what makes food pleasurable, and some meals unforgettable, and why feeding the mind satisfies appetites better than merely feeding one’s mouth. There is a section on each of the five senses plus chapters on atmosphere, social dining, airline food, food memories, digital dining that involves robots, personalized meals, and the experimental meal, or dining as theater that has become increasingly outlandish.

More than half the brain is engaged in what we see, but “only something like 1% of the cortex is directly involved in taste perception.” Smell is far more important, and Spence guides us through the important differences between “orthonasal” (breathing in) and “retronasal” sniffs (the latter through the back of the nose when we chew and swallow). Lesson: Never drink from a straw if you want to really taste your drink; it bypasses retronasal aromas.

Anything that boosts a food’s “olfactory hit” will increase perceived flavor as well as feelings of satiety. “The olfactory receptors in our nose are actually a direct extension of the brain.” They are only three synapses away from emotional circuits compared to six synapses for all the other senses. This is why the Oscar Meyer alarm clock app can rouse one so easily with the sound and smell of sizzling bacon.

We still eat with our eyes as attested by “the phenomenal rise of gastroporn,” meaning foodie magazines and the plethora of cooking shows and websites. Spence worries about it given that it leads to hunger, increased junk food consumption, and higher levels of body fat. Indeed, obese individuals have a more pronounced brain response to pictures of food even when they are full. And foods that look the best and stimulate the brain the most are usually not the most healthful. Precisely because we eat far more in front of the TV or any kind of screen, Spence makes a pitch for “mindful dining.”

One of his surprising findings is that, “tastes are very definitely associated with specific colors.” Hot chocolate tastes more intense when sipped from an orange cup compared to a white one. People associate certain shapes with tastes as well.

Want to cut down on sugar? Eat your snacks “on a round plate—the shape makes food taste sweeter.” If you want to cut down on volume, “bring out the red plates—the color tends to elicit avoidance.” The color of ambient lighting influences appetite, too. Dieting Swedish men “eating their breakfasts under blue lighting felt fuller with less food.”

Tasting with a heavier spoon led subjects unequivocally to rate food more favorably than when they ate the same thing with a lighter spoon. Those eating with heavier cutlery thought “their food had been plated more artistically.” They were also willing to pay “significantly more for it” than subjects eating the same food under identical circumstances save for using lighter utensils.

Similarly, people don’t appreciate how much sound influences taste, especially the sound of one’s own crunching. Delving into the large effect of crunch, he goes on to dissect why we don’t eat insects, which are very crunchy, and why potato chips come in such noisy packaging.

Spence measures the impact that atmosphere has on ratings of flavor and preference. Expectation and labeling likewise sway us. When a $10 bottle of wine was passed off as costing $90, all subjects said they preferred the “expensive” one. But their brain scans revealed activation “in reward centers associated with the price cue.” In another study, playing French music in a wine market led customers to purchase more French wine, but more German wine when Bierkeller music was played. “The numbers have to be seen to be believed.”

He ends with a detailed, ten-point list of the book’s key recommendations for readers who want to feel satisfied while consuming less. “Ultimately, it’s all about emotion and feeling,” and knowing “how to stimulate our senses more effectively.”