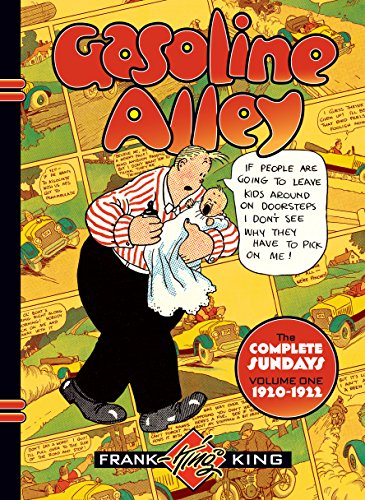 “Gasoline Alley isn’t just a comic strip, it is a neverending painting that panel by panel shows us our families, our neighbors, and our country.”

Set in a simple, small midwestern town, the newspaper comic strip Gasoline Alley stood in for many as America’s best small town. It was a place where almost everyone knew everyone else and cows dotted the landscape.

Humble, warm and heartfelt, the strip’s success centered on one of the most unusual premises in newspaper comics: a family consisting of only a father and his son—a new family that grew as their audience did.

They aged like their readers did. This idea that they were traveling through time with their audience was unheard of in a comic strip. The convention created a bond between the writer and his audience that few strips in the history of the medium have ever enjoyed.

Frank King, artist, writer and creator of Gasoline Alley, gave his readers a world that was filled with moments of life that seemed to be universal. The minutes where we daydream. The way that we look at those we love. The way we talk to each other or the way that we make excuses for the foibles and faults of our friends.

King created and drew a strip that was real in the same way that a single minute can be both long and short.

Gathering the first years of the strip as they originally appeared in Sunday newspapers across the country, Gasoline Alley: The Complete Sundays Volume One 1920–1922 showcases the world as King saw it.

What he saw and then showed readers was a colorful, vibrant slice of life. Gasoline Alley showed an America that was moving from the rural life and into a modern world.

The strip never used the cynicism, ennui or sarcasm of that modern age as its voice. It is positive without being syrupy or condescending. Its people were good at heart.

Originally a weekly newspaper strip about four men who met in a garage, just as the idea of a garage was taking shape, Gasoline Alley first appeared as a daily in 1919. The Sunday pages appeared a year later.

The early years saw the strip focus on a man’s world. It was cars, the mechanics of machinery or jokes among themselves. Gasoline Alley was a decent strip, successful on its own level. Still, the Editor of the Chicago Tribune, Joseph Patterson, thought that it could be more. He believed that the strip could attract more women readers if it introduced a baby.

On February 14, 1921, mechanic Walt Wallet, a longtime bachelor who had emerged as the genial heart of the strip, answered his doorbell. There, on his doorstep, lay an infant in a basket.

One of the greatest father-son relationships in literature was born that day. The strip, while it retained the other characters, swiftly shifted to the world of Uncle Walt and Skeezix.

In a short time the midwestern values, the idea that family was all, that there was still a rural heart beating in rapidly industrializing nation like America, allowed the strip grow into one of the most popular strips in newspaper history.

For his Sunday pages, King worked in a strict, 12-panel format. While other artists would have felt constrained by such a limiting format, these beautiful Sunday pages prove that within there was a world as wide open as the western planes he knew as a child.

One of King’s staples was to show Walt on the chase. Whether it was across a state park, down the road in pursuit of a runaway car or through the neighbors’ yards as a turkey broke free, the artist gave us slapstick, innocence, and laughs in 12 sequential boxes.

As artist and writer King didn’t slow down time for the characters that he created. They lived in the exact same world that readers did. The residents of Gasoline Alley aged and around them, seasons changed.

Production values on this first volume are extraordinary. The oversized edition features the strips exactly as they first appeared in newspapers close to one hundred years ago. The black, red, and white hues found in the first year of Sundays hold shades within their limited palate that show how much King detail was trying to convey during that period.

That sense of detail and attention explodes with the August 14, 1922 Sunday. Working in four-color process for the first time King brings us an outdoors that has as many as five shades of light green alone!

The following week he uses muted shades from the rainbow to convey simple rock formations. His distinct skill at coloring Sunday pages gave them a three-dimensional quality that elevates the strip into the dream world of America while rooting it in the reality of life.

Working together Dark Horse and Russ Cochran have created a reprint book that matches the best available in the genre. A particularly warm essay by Mr. Cochran reminds us of the importance found in the relationship between the father and the son as seen inside Gasoline Alley. What he writes of is the important place in our country’s history of not just newspaper comic strips but of popular art itself. When that art is at its best like it is in Gasoline Alley, it can show us something so revealing about ourselves and our lives that it can inspire us to be even better—both as a country and as people.

The immaculate restoration process is covered in depth in an introductory essay by Zavier L. Cabarga. All that work pays off: This is one of the most luxurious and beautiful reprint tiles.

Gasoline Alley isn’t just a comic strip, it is a neverending painting that panel by panel shows us our families, our neighbors, and our country.