A Game of Ghosts: A Charlie Parker Thriller 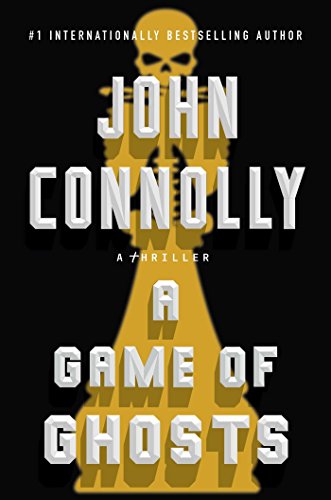 “The most fascinating facet of Connolly’s series is his skill in combining the supernatural and noir to create a story that has a feel of realism . . .”

A blend of the supernatural and noir mystery, John Connolly’s Charlie Parker series is spooky, creepy, and believe it or not, rib-tickling humorous. One can be scared to death while laughing out loud. Connolly is a creative genius who has few equals in either horror fiction or the mystery genre.

In Book 17 many of the story threads from the previous books are coming together. Charlie Parker, the private detective capable of seeing the dead, particularly his dead daughter, Jennifer, as well as assorted demons and perhaps angels, works for the mysterious FBI agent, Edgar Ross.

Charlie is not certain exactly where Ross ranks in the FBI hierarchy, nor just how extensive his authority might be, but Ross is definitely a force against the supernatural forces that threaten the status quo of Charlie’s world.

Charlie possesses a list of names of those in power who have metaphorically sold their souls to the devil. “. . . individuals who had made a pact, either knowingly  or not with the servants of an old evil.”

Charlie dribbled these names to Ross a few at a time. In exchange Charlie received a very generous government stipend, but it was incumbent upon his doing a few jobs for Ross, jobs Ross couldn’t trust his own agents to do. “Charlie understood that he was tied to Ross, and Ross to him.”

They both intend to neutralize those followers of a single individual who “. . . was leading a search for the Buried God, the God of Wasps, the One Who Waits Behind the Glass. If God existed, then this was the Not-God . . .”

Charlie’s task given him by Ross is to find out what happened to another private detective named Jaycob Eklund who was dong an unimportant job for Ross. Charlie knows better. Ross would not bother to drive all the way from Boston to Portland, Maine, for some unimportant PI. Eklund is doing something important for Ross, and the FBI agent can’t trust his own agency to investigate.

“It’s sad that you don’t have faith in your fellow agents. I mean, if we can’t trust those who spy on their own citizens for a living, who can we trust?”

Apparently Charlie is the only one Ross can trust. Moxie Castin, Charlie’s lawyer, has definite opinions on his arrangement with Ross. “Even in its amended form, Moxie regarded Parker’s contractor’s agreement with Ross as being as close to toxic as it was possible for a document to come with requiring the addition of a biohazard symbol.”

Aided by his trusty friends and self-proclaimed bodyguards, Angel and Louis, two of the most loyal and likeable gay psychopaths one would ever want to meet, Charlie begins searching for Eklund.

Eklund’s ex-wife tells Charlie that the PI has few friends and no close ones and never talks about his work; his hobby is ghosts.

Further investigation at Eklund’s home reveals newspaper articles and files linking homicides and disappearances dating back more a century to rumors of hauntings. In other words, the victims would see a ghost before being murdered or disappearing.

The hauntings seem to be connected to The Brethren, a quasi-religious group led by a man called the Magus. The group had been eliminated—or massacred—by a gang of neighbors more than a century before. But the bloodline continues and so do horrendous murders, thanks to the efforts of Donn Routh, a descendent whose job it is to carry out the murders. He is a sort of one man Murder Inc. for ghosts.

Another story thread from previous Charlie Parker novels is the Collector, a creepy man whose life’s work is tracking down and killing of evil individuals, after which the victims are devoured by the Hollow Men. At one time Charlie, with the help of Angel and Louis, traces the Collector to his last refuge, but they come to an uneasy truce.

The Collector has killed Donn Routh, but his place is taken by a duo that might be even more evil than Routh.

Another character, human but as evil as any of the Brethren or ghosts or demons or other supernatural beings, is Mother. “Parker’s first impression of Mother was that a squat black spider had just scuttled into the room.”

Mother wants to know why Charlie is looking for Eklund, and tells him that the missing PI had visited her employer and past lover, Casper Webb, to ask him about ghosts. Mother’s and son Philip’s roles are not as part of the supernatural, but as very human specimens of man’s greed.

Still another story thread from previous books is Charlie’s love for his daughter, Sam. Sam’s mother, Rachel, is afraid that Charlie’s work is putting Sam in danger. Sam has already been a kidnap victim as the result of one of Charlie’s cases. Sam was rescued when her kidnapper inexplicitly died. Rachel is worried that Sam is not dealing with her trauma and consults a child psychologist.

Charlie knows something that will terrify Rachel more that she already is: Sam is not traumatized, because he knows that Sam is not an ordinary little girl; she is something more, something or someone with instincts and powers beyond what Charlie himself possesses.

All in all, A Game of Ghosts is a fascinating read, particularly for fans who have read the previous 16 books. There is a sense that the series climax is imminent; that the identity of the follower who is the ultimate seeker of the Not-God will be revealed.

The most fascinating facet of Connolly’s series is his skill in combining the supernatural and noir to create a story that has a feel of realism. One almost doesn’t have to suspend disbelief; instead one has a feeling that just maybe Connolly’s stories of the Honeycomb world that exists within our own are true.