A Gambling Man (An Archer Novel) 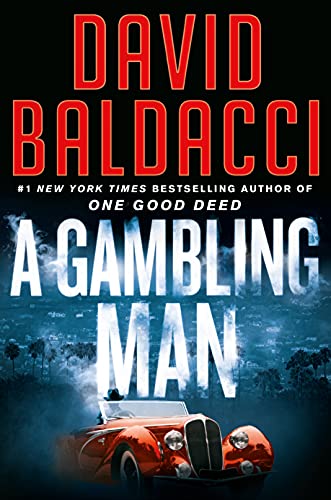 Aloysius Archer has always been a sucker for fast dames and fast cars. They’ve both landed him in jail before, but he can’t resist their siren calls. In bestselling author David Baldacci’s new Archer sequel, A Gambling Man, Archer has just been released from jail on the East Coast and has hopped on a Greyhound Bus heading westward to become a private investigator in Bay Town, California. All he’s got is the clothes on his back and an Army Honorable Discharge for his service in World War II.

A quick stop over in Reno lands him with a new dame, an aspiring actress Liberty Callahan with her sights set on Hollywood, and a sweet ride in a snazzy blood-red French 1939 Delahaye convertible. Archer has won the car in a poker game, but the problem is its prior owner owes a sizable debt to the bookies. When they attempt to seize the car from Archer in payment, Archer has other options on his mind.

He and Liberty escape their clutches and arrive unscathed in Baytown. The peace and quiet is short-lived. Upon meeting his new boss, an old time PI named Willie Dash, Archer lands in the thick of a political scandal—a blackmail scheme involving an affair by a mayoral candidate, Douglas Kemper. Kemper is seeking to fill the vacancy left open by the former mayor who was found dead in his bathtub.

Wealthy in his own right, Kemper is the son-in-law of Sawyer Armstrong, who runs Bay Town, and whose influence seems to extend in every direction, including the cops, and Midnight Moods, a burlesque card club. Ruby Fraser, Kemper’s alleged lover, has been murdered at the club, and all fingers seem to point to Kemper. Kemper is convinced someone is framing him, and he hires Archer and Willie to prove his innocence of the affair and the murder. The questions are: Who is blackmailing Kemper? And why do they want him out of the mayor’s race?

Liberty replaces Ruby as the headliner at Midnight Moods and promises to keep her eyes and ears open about the Kemper-Fraser affair for Archer. But the body count continues to rise. The corpse of Kemper’s associate is also discovered at the club, and there are two suspicious deaths at Dash’s office building.

The twisty plot thickens into a cat-and-mouse game among Kemper, Armstrong, Beth Kemper, Douglas’s beautiful wife, the police, and Archer and Willie. And when Archer and Dash untangle the truth behind a string of long-kept secrets from Armstrong’s past, they discover their tragic relationship to the present crimes.

There’s plenty of suspense as Archer repeatedly risks his life to prove his instincts as a gumshoe. Baldacci has created a terrific anti-hero in Archer. He’s a WWII Veteran, young, tall, handsome, and quick with his mind and knuckles. As Willie instructs him, “You have to follow the money, Archer. It usually takes you where you need to go.” The adventure takes Archer sleuthing from the wealthy hills overlooking Bay Town to the seedy Midnight Mood, and up and down the California coast to uncover the dangerous enterprises and characters, which tie the murders together.

In A Gambling Man, Baldacci immerses the reader in the post-war atmosphere of the 1950s with his colorful language, descriptions, and historical references. Honestly, the smart dialogue between the characters comes off a bit too smart, making them appear to be cartoons rather than real people. And while the Kemper blackmail plot is merely the tip of the dark side of the iceberg called Bay Town, the reader must wade through a muddled mystery for a payoff reminiscent of Chinatown.

Fans of Baldacci should go all in for A Gambling Man. This spicy novel deals out a hand of brothels, gambling dens, drug operations, and government corruption—all a sure bet for a rollicking good time.