Gambling with Armageddon: Nuclear Roulette from Hiroshima to the Cuban Missile Crisis 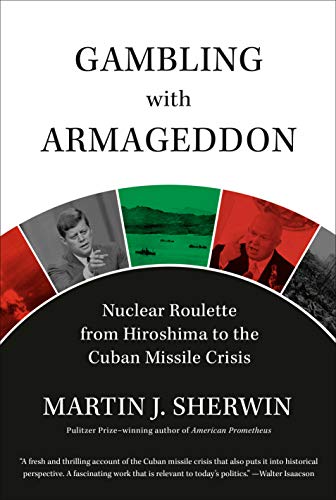 “should make everyone who reads it and was born after October 1962 extremely thankful to be alive . . .”

The Cuban missile crisis was at one time a significant part of the Kennedy Administration mystique. However, now you should forget everything you think you know about how close the world came to nuclear war, then read this superb new book that completely upends the mythology of those critical weeks in October 1962.

Professor Martin J. Sherwin has mined numerous sources, including recent conferences and interviews with many critical participants from the US, Russia, and Cuba, along with newly declassified or untapped sources to provide a more complete picture of the assumptions, prejudices, fears, and politics that both led to the crisis and its successful resolution. Most importantly, he has cross-referenced the original secret White House audio recordings JFK made of the group known as the Executive Committee (EXCOM) with minutes from the meetings of the Joint Chiefs of Staff and other departments to present a more chaotic picture of the discussions leading to the eventual actions that led to the de-escalation of the crisis.

From the opening pages where a Soviet submarine captain is minutes away from firing a nuclear-armed torpedo at American warships during the climax of the crisis on October 27, the author draws the reader into  the immediacy of the crisis, presenting a frightening picture of how little actual control both the American president and Soviet premier had over events and how close the confrontation came to military action and likely escalation to a nuclear exchange.

The author provides a more detailed backstory to the crisis than any previous history, placing events in the context of the Cold War nuclear arms race, beginning with the first atomic bomb in 1945, through the technical evolution and policy development of these weapons by both the US and USSR during the 1950s, to the ultimate decision by Nikita Khrushchev to deploy Soviet missiles to Cuba.

The misconceptions and misunderstandings of both sides only intensify with the ratcheting up of Cold War tensions in the early 1960s, leading to potentially dangerous decisions by both sides. This includes the fact that the Soviets had over 40,000 troops on the island in October 1962, along with a substantial tactical nuclear arsenal to help repel a potential American invasion force. Critically, the US significantly underestimated the number of Soviet forces in Cuba, and had no clue that over 100 nuclear weapons were on the island and available to the local Soviet commander.

The book also offers some surprising revelations. While many readers may be somewhat familiar with the relationship between the attempted overthrow of the Castro regime at the Bay of Pigs debacle to the Soviet missile decision to help protect the Castro regime, they might be surprised at how much the city of Berlin figured in the crisis.

Before Khrushchev’s decision to send Soviet missiles to Cuba, Berlin had been the key flashpoint of the Cold War, with the Berlin Wall and confrontation at Checkpoint Charlie in 1961 still uppermost in both leader’s calculations. As the EXCOM recordings and other sources show, nearly every considered action brought concern from Kennedy on how the Soviets might counter-move in Berlin. Even as the blockade goes into motion, negotiations continue, and the author does an excellent job of reconstructing the series of proposals, counter-proposals, and agreements that successfully ended the crisis.

Interestingly, he concludes with the myth-making and reputation building by various members of the Administration, minimizing the tremendous disagreements among Kennedy’s advisors and, most importantly, concealing the secret agreement to dismantle American missiles from Turkey several months after the Soviet missiles returned to Russia. This agreement was kept secret for years after JFK’s assassination and was one of the many revelations of the chaotic and uncertain crisis management that ended up, to paraphrase one participant: “succeeding by dumb luck.”

This engrossing book should make everyone who reads it and was born after October 1962 extremely thankful to be alive, because if one or two key decisions by ordinary people or important leaders had been different, they very well might not be here.