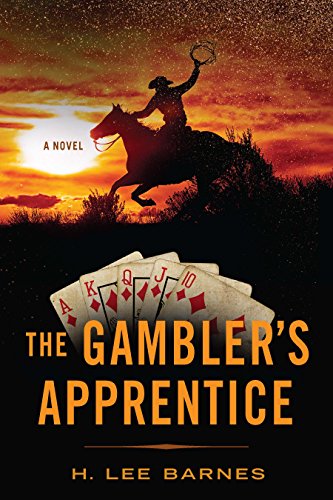 What a shame that the era of the Western movie headed long ago for the last roundup. This novel is perfect for adaptation to that great American genre—and given the chance just might revive it. It’s that good.

It is 1917, and a farm family in drought-stricken Texas is fending off destitution, albeit just barely, by rustling Mexican cattle across the Rio Grande. The war in Europe has created a demand for beef—for cattle buyers who don’t care whose cattle it is or where it came from.

Welcome to the world of Willy Bobbins, the titular apprentice. Only sixteen as the opening credits roll, he is already adept at living on the edge, thanks to a drunken, improvident, and generally no-account father whose idea of vocational training is to tutor his son in remorseless theft, chiefly by example.

Given the gunplay and narrow escapes involved in their life of crime, especially from men who don’t take kindly to cattle rustling, our hero at first looks more like Willy the Kid than Willie, the kid, but through a chance encounter with a card shark while in the Laredo calaboose, Willy learns a new and better, and arguably safer, way to make a living: playing poker (if you don’t get caught cheating).

Sprung from the pokey and covertly working in cahoots, the two gamblers roam from town to town, staying in each until they run out of suckers or wear out their welcome, whichever comes first. Making real money at last, Willy dreams of returning home to the girl he left behind (and who belongs to somebody else), buying a spread of his own, and settling down.

Alas, when he does return home he screws up the lovers’ reunion and soon takes to the road again, this time toward New Orleans, because 1) the city is a magnet to life’s high rollers (of all kinds) and 2) because his common sense tells him “she went thatta way.” Lisette, his beloved, is a “girl of color” who dreamed of escaping the racism of Texas for the more cosmopolitan climate of The Big Easy.

In a great reversal, he begins to find himself, chiefly through helping others. New Orleans is in the grip of the 1917–18 flu pandemic, and Willy spends much of his “fat bankroll” to find and buy what seems to be the most efficacious medicine against the miseries of the disease, simple aspirin, which has climbed in scarcity and price as the death toll has risen. He also risks his own health in distributing the aspirin, free, door to door, to his neighbors in the city’s French Quarter.

Running out of money in a city that disease is closing down, Willy concludes that “be it ever so humble, there’s no place like home.” But he finds when he gets there that you really can’t go home again.

Except once in a blue moon, when else do you find a story packed with action and adventure involving big-as-life characters in settings and situations readymade for the silver screen? What’s more, the characters already know their lines; no script doctor is needed to improve this dialogue. Moreover, the author’s powers of description rival those of Cormac McCarthy in showing that the outback of the Tex-Mex border is no country for old men, and that even young ones age quickly there.

This novel has an appeal as wide as Texas and a historic sweep that is purely American. Willy Bobbins can’t read or write, but he is representative of the pioneer stock who settled the West, fiercely independent, amazingly resourceful, but touchingly bewildered by developments beyond their rustic ken: a world war, a plague, relentless drought, and a rapidly oncoming future in which they seem to have no place.

Even in cow-town Texas, the ubiquitous horse has begun to yield its importance to the newfangled automobile, and a word picture of Willy watching telegraph and telephone poles march across the plains says it all. The road to the future, any future, has always been littered with roadkill, and people like the Bobbinses are often caught in the headlights.

Barnes, a Vietnam vet, makes his home in Las Vegas, Nevada, where he teaches English and creative writing at the College of Southern Nevada. With several prize-winning works to his credit, he was inducted in 2009 into the Nevada Writers Hall of Fame.