The Gamble: Choice and Chance in the 2012 Presidential Election 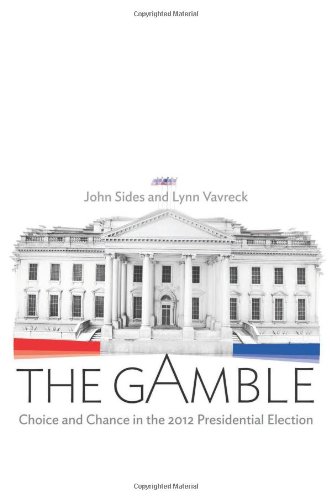 “You have to admire their consistent and scientific approach; other commentators basically just wing it.”

The typical view of the last presidential election as expressed by any number of pundits, goes something like this: “The campaign pitted an extremely vulnerable incumbent against a promising challenger. The latter made a number of tactical and rhetorical mistakes, permitting the incumbent to run a more technically efficient campaign that just barely won him the election—President Barack Obama earned, after all, only 51 percent of the popular vote at the end of the day.

Authors Sides and Vavreck contest this view in their book, based on the kind of analysis political scientists still believe in: modeling, data mining, etc. You have to admire their consistent and scientific approach; other commentators basically just wing it. If the social sciences as a group were not such a terrible failure as a propoonent of models of reality of any kind, it would be easier to accept its findings.

Essentially, the authors try to demonstrate that Obama had a good deal more support going into the election than is generally recognized. They point out, with some justice, that the economy had improved enough by the time of the election to convince enough people to give Obama a second chance.

“It’s hard to beat an incumbent party in a growing economy,” authors Sides and Vavreck write, “and even harder to beat the actual incumbent himself.” GDP grew slightly during 2012, and while there was not much improvement in unemployment, the movement had slowed sufficiently to give Obama credibility.

They then take their analysis further. They have developed a model that correlates public-opinion poll results from each quarter between 1948 and 2008 with factors like unemployment and inflation rates, as well as relevant current events.

Backtesting seems to show that the model works—the authors test the model with President Reagan, for example. Then, applying the model to the Obama presidency, it appears that Obama started out with relatively low popularity levels—2009 to 2010—and then got rather a lot more popular.

That Obama could achieve this in spite of the dismal state of the economy and the high level of unemployment is rather remarkable, particularly given that his administration has achieved almost nothing in terms of domestic or foreign policy—except in health care, of course, in which he has generated an ongoing controversy.

Whether one agrees with Obama about various subjects or not, one would have wished him to do something according to his views in the interests of the country. Yet he overcame this obstacle in the election.

It is even more remarkable given that we all expected Obama to be penalized for being black. This, the two authors take pains to show, probably cost him four points of approval rating overall, and yet he surpassed this obstacle, too.

As for Romney, he had the support of the Republican leadership as a moderate candidate, and the authors show that he managed to be the least objectionable to every wing of the very divided party. A poll from December 2011 showed that he was viewed positively by likely Republican primary voters whether they were conservatives or moderates, pro-life or pro-choice, relatively wealthy or not. More than two-thirds of the Tea Party members surveyed expressed a favorable opinion of him, with non-Tea Party people doing so at the same rate.

Ironically, Romney called for action in Syria as a candidate, and Obama scored points by refusing to consider it—a bit of a problem for the president now, of course . . .

Overall the sense of the book is that Obama was too strong for Romney to beat. It makes a very carefully documented case for this point of view. It is well worth taking into account for any serious historian of this election as an alternative to the generally accepted view.