A Galaxy of Immortal Women: The Yin Side of Chinese Civilization 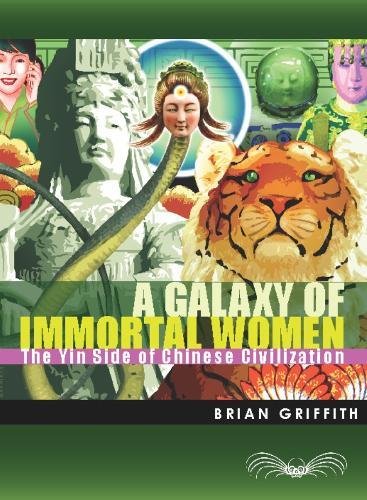 To read through this compendium of female icons in the Chinese culture is to appreciate the ebb and flow of the changing Chinese environment across the thousands of years and especially to appreciate the role women have played in such a changing culture.

In documenting the history of women’s roles in the Chinese culture, author Brian Griffith has taken on a task of gargantuan proportions. He defines his goals for this book early in the introduction when he describes the women of this history as “. . . hav[ing] their own traditions, religions, and visions of the future. I think they’re a gigantic force for good in the world, and they always have been.”

Mr. Griffith dives into this history assuring the reader that although tradition may tell us that Chinese women did not have powerful roles, he peels back layers of data showing another side to that picture, a side where the “. . . folklore is rich in goddesses, immortal women, and female heroes.”

To reinforce his statement, he shares the history of goddesses such as Guanyin, considered the greatest deity in China—the goddess of universal compassion. He goes on to share the stories of many other popular female figures—goddesses, shamanesses, and other religious leaders.

In his third chapter, Mr. Griffith describes the Legendary Age of the Goddess where he details the legend of the Golden Age or what many in the culture consider to be the beginning, a time he describes as unspoiled nature and uncorrupted human virtue. It is during this age that women played a strong role in the creation of China. Mr. Griffith quotes from many mythologies that have passed down through the ages, showing China’s rich female heritage.

In the chapter on the original partnership of sexes, Mr. Griffith explains that many of the myths of Chinese culture describe a creator as a “swirl of cosmic forces”—Yin and Yang energies or goddesses and gods—thus reflecting on the equal relationships between male and female as joint creators. It is here that we learn about the Queen Mother of the West, who was considered the chief of the shamans. Mr. Griffith discusses female and male shamans and the roles they played in village mythologies.

Mr. Griffith spends several chapters discussing women’s roles in the three main religions of China—Taoism, Buddhism, and Confucianism, and specifically the roles held by the males and females. While males have held predominant leadership roles, in both Taoism and Buddhism, women have been recognized in some form of leadership positions. Not so much in Confucianism. In this discussion on Taoism, author Griffith relates several informative and interesting tales of women in folklore. In particular, he discusses their spiritual journeys and how these stories have come down through time to remain alive in present day.

The discussion about Buddhism describes the strength of the male presence in the religion and how it competed with the popular Taoism. The role of women in this religion showed how the female took on a more independent role, while males continued to develop their leadership strengths.

Confucianism is described as a “Cult of ‘Mamas’ Boys’” under which women are subjected to tight controls. After achieving acceptance, and for almost two thousand years, Confucianism “. . . became a religious arm of autocratic government . . .” Then, in the light of 20th century revolutions, it fell out of government favor and was relegated to a feudal belief system.

In this chapter, Mr. Griffith goes into superb detail about the history of the founder of the religion, and how Confucianism established a foothold. Over the many years that followed, the government reevaluated concepts and family issues until equality between men and women “could not stand.”

In the last chapters of A Galaxy, family values in both the warlord age and present time, receive attention, with some focus on polyandry (women with multiple husbands) and its role in village life. Mr. Griffith ends the book with a discussion of Goddess Religion of the Modern and Planetary Age in which he talks about the role of women in modern revolutionary wars. His descriptions 20th and 21st century women are rich in the stories of their goals and sacrifices and their fights for equality. While the actual achievements of equality in current day China may remain questionable at best, the stories and history of these fights are rich in detail.

If there is a down side to this book, it is the preponderance of information detailed throughout. Mr. Griffith’s discussions on the rise and fall of the role of Chinese women, the goddesses’ outlaws, and how religions changed the perception of women in the culture, dig deep into the long history of this impenetrable culture.

It goes without saying that a society that dates back several thousands of years has survived on a multitude of mythologies that support its many religions and regimes, and Mr. Griffith is to be applauded for sorting through this massive amount of information, but for the average reader—even the interested historian—the very amount of detail is overwhelming.