The Galaxie and Other Rides 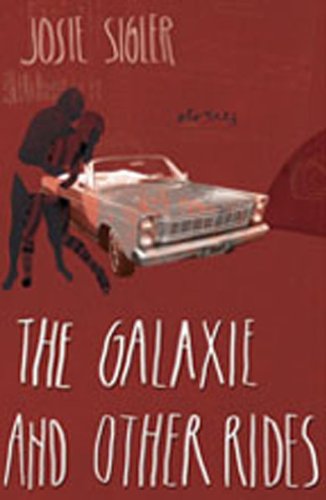 “This collection establishes Ms. Sigler as a leading chronicler of America’s smoldering Rust Belt underbelly. It is a pleasure to recommend this book.”

A group of teen boys waste time playing chicken (as in “Why did the chicken cross the road?”). The game consists of running across a busy four-lane road at night just as a vehicle crests the nearby hill and bears down on them. Suddenly the boy who invented the game disappears after a particularly bold dash.

Was he hit? Did he lose his nerve? Can the game continue without him? The grim mystery of “Chicken” is one of 12 short stories in Josie Sigler’s stark collection, Galaxie and Other Rides.

Ms. Sigler’s stories are set in hardscrabble parts of Michigan and other northern states. While the exact setting varies, the characters are united by difficult circumstance: teens with no options head into the military; the daughter of a prostitute grows up in a sketchy motel room at an interstate exit; ranch hands euthanize a much-loved girlfriend; a single mom tries to live normally with her baby and brother’s former lover (now dying from AIDS); cynical older biker-girls look down on a new member of their clique for loving the man with whom she rides.

There’s a Faulkner-ish vibe to these stories. Like the old master, Ms. Sigler creates sympathetic characters committing unsympathetic acts—all the while stranded on the lowest rung of the socioeconomic ladder. Ms. Sigler says of one of her protagonists: “You stood waiting for the bus with kids who were white trash but still better than you.” This quote rings true for the majority of stories in this collection.

Despite the pessimism at the core of her collection, Ms. Sigler tells compelling stories. In “Even the Crocuses,” for example, she narrates the life of Marcy as she cheats on a good husband, neglects her children, imposes on a kindhearted neighbor, descends into alcoholism, and pursues an adulteress relationship. Despite this, Ms. Sigler pulls off the minor miracle of keeping Marcy a sympathetic character.

Only a highly skilled author can paint such a deeply flawed person with enough empathy to keep the reader from labeling the protagonist a miscreant and moving on. Ms. Sigler pulls this off multiple times across the collection.

If there is any weakness to The Galaxie and Other Rides it is that the content is not very original. In the last few years, a host of young authors have published strong short story collections about America’s exurbs during the Great Recession; Alan Heathcock’s Volt and Shann Ray’s American Masculine are just two examples. This doesn’t diminish Ms. Sigler’s fine storytelling, but it does make that storytelling less surprising and daring.

The Galaxie and Other Rides is a well executed collection of sad, realistic stories. It is the literary equivalent to rural gothic indy-classic movies like Sling Blade and The Apostle. This collection establishes Ms. Sigler as a leading chronicler of America’s smoldering Rust Belt underbelly. It is a pleasure to recommend this book.