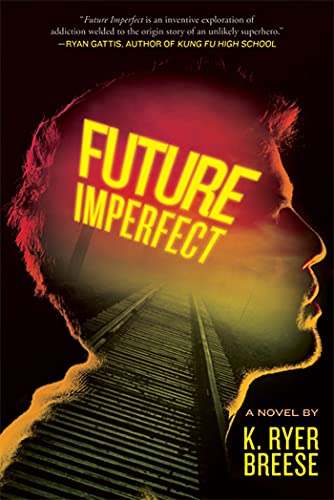 Ade Patience has an addiction. It’s an addiction unlike that of any other teen you will probably ever meet. It’s not alcohol, drugs, or even prescription medication. Only one thing works for Ade giving him the much-needed “buzz” he desperately craves: Ade needs to be knocked unconscious. It’s not necessarily the unconsciousness that gives him the out of this world feeling he seeks but the high that comes from the resultant ability to see into the future. With his unconsciousness, Ade is able to see beyond the present and even know when certain events will happen: such as the day he will meet his true love, Vauxhall Rodolfo.

While seeing the future can be a powerful thing, it can also hinder your ability to live in the present. Hounded by parents, teachers, and his doctor to stop his destructive, injury seeking behavior—such as jumping from the high-school roof—Ade has a hard time with the everyday, mundane tasks of schoolwork and only seems to look longingly forward to the day he will meet the girl of this dreams.

Then the long-awaited day arrives. Ade quickly realizes that what he has seen in his visions may not always be the whole story. Vauxhall has some very real problems of her own that even a visionary boyfriend may not be able to fix—especially if Ade sticks to the unspoken rule that “he can never change the future.”

But what if, in order to actually get that relationship with Vauxhall, he has to break that rule?

The narrative of Future Imperfect follows Ade’s sometimes-odd thinking process and meandering thoughts. While Ade is an intriguing and unique character with promise, at times he fails to deliver for readers: such that what might happen next feels like an author’s worst nightmare: a big so what? The beginning of the book is especially slow, with very little action besides Ade’s various ways of seeking concussions.

The major premise of the book is quite promising, but the way it play out, too many ideas and themes come into play and few are ever brought to fruition. Future Imperfect never really seems to engage the reader to the point of being engrossing. While many young adult readers will at first rejoice at the promise of a unique male protagonist, in the end the book simply seems underdeveloped and a bit confusing.

A side note: A book titled Future Imperfect may lead some readers to expect a dystopian story— a subgenre that right now seems to dominate a lot of the new offerings in young adult books—and in that they will be disappointed.

Love it, like it, or hate it, Future Imperfect is definitely readable, but perhaps not one of the most enjoyable of young adult books recently released.