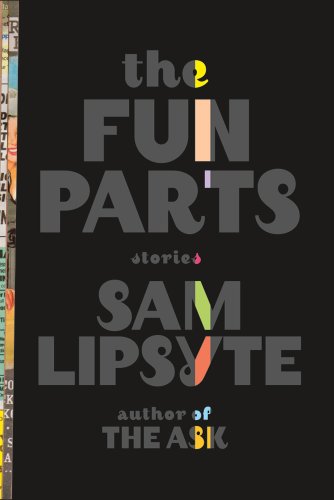 “The Fun Parts is dude lit. For smart people.”

Past Guggenheim Fellow Sam Lipsyte’s darkly funny collection of short stories, The Fun Parts, is not for the fainthearted. Most of the stories are narrated by articulate, clever, angry, screwed-up young men.

The Fun Parts is dude lit. For smart people.

The stories in The Fun Parts cover such themes as family dynamics, relationships, parenting, and drug addiction with a touch of science fiction and fantasy thrown in.

But the stories involving family life are not charming domestic tales. Rather they are often sharp and sarcastic in tone and rife with scabrous humor. The very male sense of humor and content of the stories is aptly summed up by the narrator of the tale, “The Worm in Philly,” who describes his idea about a book for boys: “Everything’s a colossal lie about bunnies and rainbows and butterflies. But the boy needs the truth of us as meat, to bathe in the blood of our meat war.”

Most of the stories open with grabbing, funny opening lines. For instance, “The Climber Room” begins, “The sign in the Sweet Apple kitchen declared it a nut-free zone, and every September somebody, almost always a dad, cracked the usual stupid joke.” Or the final story of the collection, “The Real-Ass Jumbo” starts, “This world would end. The brink beckoned. A bright guy might as well pick a date. Gunderson had.”

The most hilarious and in some ways the most outrageous story, “The Wisdom of the Doulas” exemplifies Mr. Lipsyte’s style and tone at its best. The tale is narrated by a mad male doula hired to help the Gottwald family with their new baby. In another wonderful introduction, Mitch, the story’s narrator, asserts: “My old mentor once told me that we earn our fee on the second day. I’m beginning to see her point. Yesterday the Gottwald baby was a beautiful, if slightly puckered, dream angel, fresh pulled from his amniotic pleasure dome. Yesterday the Gottwalds were the stunned and grateful progenitors of a mewling miracle.”

The first narrator of the multinarrated, multipart, beautifully constructed story, “The Republic of Empathy,” sums up perfectly the stories in The Fun Parts: “Peg always said I shouldn’t model sarcasm for the boy, but who will? Everybody’s so earnest around children. Besides, I’ve always wanted to model, to strut down the runway under all that strobe and glitter while the fashionably witty cheer on my sarcasm.” How very self-aware and true.