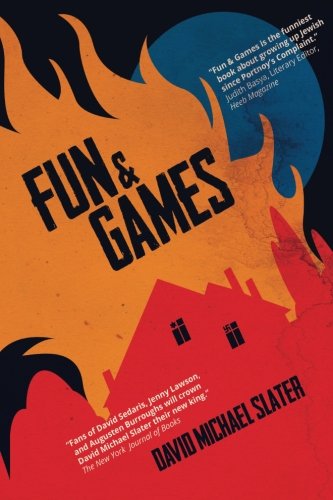 “David Michael Slater . . . throws all kinds of crazy against the wall—and not only does it stick, it works brilliantly.”

Getting through high school is difficult enough—especially when you’re a Dungeons and Dragons geek like Jonathan Schwartz.

Add in two sisters who lean toward the cruel and sadistic, a famous father who shuns his Judaism, a Holocaust-survivor grandmother who tells incredibly offensive Jewish jokes, and his father’s zealot “inkwhores” showing up at the house begging to be impregnated.

Poor Jonathan doesn’t have a chance.

After a calamitous meeting with the family rabbi, Jonathan’s father runs off to Israel to live with an ultra-orthodox sect under the guise of writing a new book. But the family only sees it as abandonment. Shortly thereafter, the Schwartz family train begins to derail. It’s a wild and sordid ride to its final conclusion.

Though seemingly a tale rife with the depravity and debauchery of hormonal youth, Fun and Games author Slater deftly balances out the storyline with a deep, dark emotional flair that disguises the heartbreaking truth hovering just below the surface.

Fun and Games is a multifaceted story full of wit, wonder, and blind corners—just like real life—perfectly reflecting the average American family in its many relatable moments followed by sighs of relief. In this very commendable effort, David Michael Slater throws all kinds of crazy against the wall, and not only does it stick—it works brilliantly.