A Full Moon Is Rising 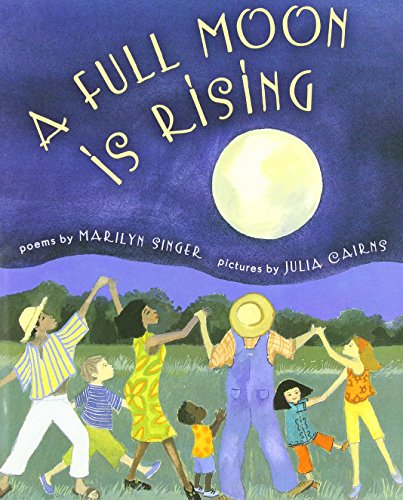 “A Full Moon Is Rising gives readers ample cause for celebration, regardless of the night sky’s performance.”

Framing her accessible poetry set in various locales is an array of fascinating facts about the moon and our world. The end papers offer a helpful map, where the illustrator notes the sites specified in the poems. Author Singer follows that up with a brief, readable explanation of the Earth’s moon, brought to life with illustrator Cairns’ watercolor paintings showing the moon’s phases as they appear in both the Northern and the Southern Hemisphere. The poet then wraps it all up with details about each poem’s featured culture and how those people have understood and celebrated the moon.

The settings for the poems illustrate the vast influence the full moon has exerted over people down through time and across the globe. Ms. Singer begins, surprisingly enough, with a poem set in New York City, before alighting in Canada’s Bay of Fundy, site of the world’s highest tides; and then to the countries of Turkey, Israel, Morocco, Mali, South Africa, Australia, China, India, Colombia, and Mexico. Educators will reap abundant curricular tie-ins—in science, social studies, geography, and religion—from this collection.

Young and old will likely gain insights as they pore over this pleasing, well-conceived book. Whether that new understanding comes from the poem, the explanations, or the illustrations—or all three—is impossible to predict. Take, for instance, the poem set along the coast of Broome, Australia: “Under this sea, divers find pearls,/ though none as big and round/ as that jewel up high./ Its glow builds a magic staircase/ from the mudflats to the sky.” In the information following the poems, Singer points out that when a full moon shines on the mudflats there, it creates the image of a staircase that leads up to the moon. Ms. Cairns’ painting evokes the mystery beautifully, in an evening scene with silhouetted children leaping for luminous steps.

Another pleasing aspect of Singer’s new book is the arrangement of poems, with its opening and closing with the same full moon in Times Square. “Between the skyscrapers, it takes a bow./ ‘Encore in one month!’ it proclaims./ ‘Admission is always free.’” Ms. Cairns’ simple, colorful image of the moon-gazing girl in the first poem reappears at the finale.

A Full Moon Is Rising gives readers ample cause for celebration, regardless of the night sky’s performance.