Fuck, Now There Are Two of You 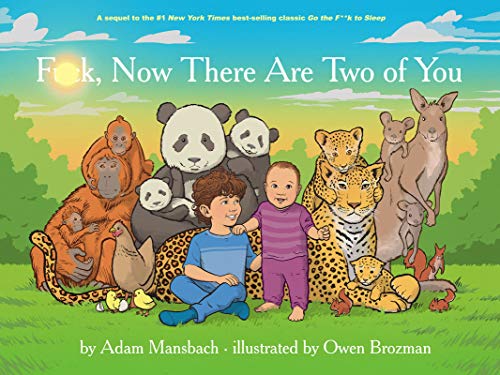 Adam Mansbach has redefined parenthood from the perspective of the panicked parent. His third title in the series, Fuck, Now There Are Two of You, is a sendoff of the new sibling trope, but with the rivalry coming from the parent's reactions to the new child.

"I have wonderful news for you, darling.
A little brother or sister is coming.
As for me, my life is pretty much fuckd now
Because two's a million more kids than one."

And so it begins, the horrors of a new baby on the way.

The prediction of the first child's iinevitable reaction is hilarious:

"Soon you won't be the focus of all of our attention.
Chances are that will make you a dick."

And yet there is love amidst all the angst, for the parent acknowledges the surprising adoration that hit him when the first child arrived. Then we are treated with an illustration of the new baby screaming its head off in the middle of the night while the first child plays happily on the bed and the aggrieved father is bemoaning his new existence.

The father admits to witnessing moments of snuggling love between the siblings, despite moments of "motherfucking fratricide" by the older sibling.

Amid all the chaos, the parents are reassuring (to a point):

"I don't love you any less now, my dear.
Love's not a pie; we don't have to divide it.
I'm just so frazzled I hate everybody.
And I'm too fucking tired to hide it."

The illustrations by Owen Brozman are refreshingly inclusive, with varying genders and races among the siblings and parents, different on every page so we don't get the same combinations twice (there is even an animal family). And the expressions of all are appropriately gleeful, despairing, and furious, as in the case of a sibling whose toddler sister's tantrum prevents the parent from being able to accompany them on an outing, any outing.

Then comes the hail Mary when the parent realizes that one day, the kids will go off to college, intimating that this time in their childhoods is precious nonetheless—until the last stanza:

"At two in the morning it hits me.
My heart thumps a-rat-a-tat-tat.
If you two are going to college
How the fuck are we paying for that?"

Kudos to Adam Mansbach for revealing parenting as an exercise in failed self-control and to Owen Brozman for making it look so fun despite all the despair.