Frozen: Heart of Dread, Book One 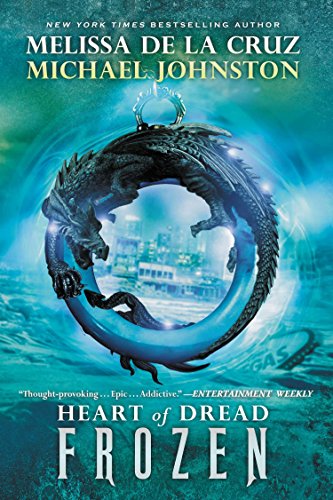 “. . . a cautionary tale about the current state of our fragile world . . . It provides a chilling prediction of one possible outcome.”

It’s been more than one hundred years since poisonous oceans covered half the nation and swept away everything. The land is in a perpetual deep freeze, covered in snow and ice overlying immense piles of garbage. The official currency is not dollars, jewels, or gold, but heat credits, for nothing is more valuable than staying warm.

Even teens like Nat and Wes must earn their own way in New Vegas, one of the few remaining outposts of human occupation. Wes is an expert conman, and he runs his own crew of mercenaries who are ready to do nearly anything for the right price.

Nat works as a blackjack dealer in a New Vegas casino, hiding the fact that her tiger-like eyes and the flame-shaped mages’ mark on her chest signal that she is one of the outlawed "freaks" with special powers. A voice in her head says her destiny is filled with rage and ruin, fire and pain. The voice also tells her she must journey to the Blue, a place where legends say the air is warm, the water turquoise.

And now she has the map showing the secret doorway into the Blue which lies somewhere in the poisonous Pacific. All she has to do is ask the man who owns it to give it to her. Like he has a choice.

The voice tells her to hire a runner to lead her to the Blue. Wes and a member of his crew try to scam her at the blackjack table, but one of her abilities comes to light when she makes the credits he wins disappear from the table and reappear in her pocket. But Wes comes highly recommended for the hazardous work of running, and she hires him to lead her into the wilderness.

Creatures live in the frozen wasteland that Nat and Wes must cross: sylphs, thrillers, the smallmen and the drau. Slave traders. And more of the mage-marked, like Nat. Forging an uneasy alliance, Nat, Wes and his crew escape corrupt officials, bombs, gunfire, drones and pheromone-scenting nanoparticles to reach K-town, a lively enclave ablaze in the ruins of Los Angeles.

And when the group boards a battered ship and begins the next stage of their journey, things really get tough! The Pacific is an icy watery wasteland, dark with poison and filled with monstrous bergs of floating garbage, dangerous people, and creatures that no one can imagine. And the government of the RSA chases anyone trying to escape.

Melissa de la Cruz and Michael Johnston have crafted an exciting and imaginative story that is two parts vision quest and one part adventure. For at its heart, Frozen is about two young people seeking to define their identities and trying to find themselves in a dystopian nightmare of horrific magnitude.

The well-paced action is taut, the characters diverse and finely drawn. And while this is a multiple book series, the ending of this first story is fully satisfying and doesn’t leave the reader dangling until the sequel comes out.

When examined on another level, Frozen also serves as a cautionary tale about the current state of our fragile world so badly damaged by abuse and neglect. It provides a chilling prediction of one possible outcome if our poor stewardship of Earth continues on its present path.