Frontline Turkey: The Conflict at the Heart of the Middle East 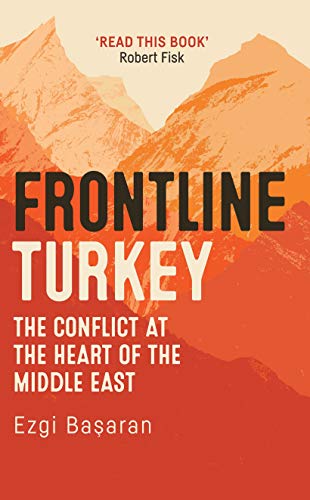 “an insightful book, providing a closeup look at a conflict that has bedeviled the Middle East and only added fuel to the ongoing fires in that region.”

Violence and conflict in the Middle East come in many forms and involve myriad nations and peoples. Some are sectarian and ethnic, others are religious or political. From Turkey to Yemen and many other points in between, especially Israel and the Palestinians, tension and conflict would seem to be endemic and ubiquitous.

With the emphasis currently on defeating the Islamic State, the ongoing, decades-long problem between the Kurdish people and Turkey has been somewhat pushed to the backburner. After gaining some prominence following the First Gulf War, the Kurds have found themselves on the short end of the stick in Iraq, Iran and Syria as well, despite their best efforts to attain a settlement with which they could live in what they would prefer to call Kurdistan.

This ideal homeland will probably never come to fruition given the reluctance of any state to cede territory. Consequently, Kurds in Turkey strive to obtain an autonomous region within that country and this is what has been at the heart of the problem. Although participatory in the country's politics, they have been largely marginalized, considering themselves to be second-class citizens where relations with the national government are concerned.

Author Ezgi Basaran maintains that this Turkish-Kurdish problem forms the linchpin of the overall conflict affecting the Middle East and investigates this problem to the nth degree, delving deeply into the events, personalities and politics which have afflicted these two disparate sides now for well over 40 years.

Be forewarned. This is neither a pleasure read nor an easy read. It should be realized that this volume is primarily only for those whose interest lies in Middle Eastern conflict and politics and, specifically, the relations between the Turks and Kurds. Indeed, one should already have considerable familiarization with the points of contention, cultures, parties, personalities and politics between the two.

Basaran not only recounts the original basis and history of the conflict but also the Kurds' contemporary place in the Turkish state. Willing to negotiate and wanting to have peace for themselves and their communities, they have been subjected to dispossession and oppression to the point of maintaining an on-again off-again violent war against the state.

By employing terroristic, asymmetrical means to assassinate leaders, ambush and kill police and security forces to influence public opinion, Kurds have fought to drive the government to the negotiating table to recognize their rights as a people to education (in their own language) and autonomy as well as acknowledgement of their culture while continuing to hold a place in Turkish society.

Complicating all of this are the multiple competing parties and organizations among the Kurds themselves. There is everything from the armed wing (the PPK), to a youth movement, women's organization and regular political parties and leaders, one of whom is practically the Kurdish version of the cult of personality.

While an ostensible democracy and its own linchpin for NATO in the overall region, Turkey has done everything possible to thwart the Kurds, according to Basaran, while moving ever closer to an authoritarian state, something that may remain to be seen for those unfamiliar with Turkish politics.

In any event, the major players are all here. Basaran covers, among many other things, Kurdish relations with the outside world, especially Europe and the United States which has given sanctuary to a main Kurdish leader and armed the Kurds in their fight against ISIS influence and persecution of the Kurds in Syria, much to the anger and dismay of the Turkish government. Indeed, there have even been suspicions of Turkish aid to ISIS relative to the Kurdish problem.

The author believes that the Kurdish problem has gone global and that the only way to curb tensions and eliminate at least some of the conflict in the Middle East is for the world to step in, pressure Turkey to negotiate in good faith and resolve the problem, obviously to everyone's satisfaction.

As a further indication, the author herself has come under fire from the Turkish government after covering the conflict between the parties as a journalist, eventually resigning as editor of a Turkish news outlet for her reporting following government censorship crackdown.

As previously mentioned, if one has an interest in Turkish-Kurdish history, relations and politics, this is an insightful book, providing a closeup look at a conflict that has bedeviled the Middle East and only added fuel to the ongoing fires in that region.