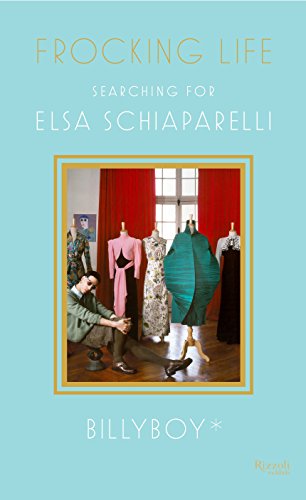 If you ascribe to the adage that truth is stranger than fiction then step right up, this is a book that’s perfect for you. Frocking Life is one of the most difficult books to review since it is really two books in one.

The first half is devoted to the life of the author and written by the author. As quoted on page 106, Bettina Bergery summed up this autobiographical segment best by stating “there is nothing more fictitious than a memoir.” Aside from the self-aggrandizing and the hyperbole of one’s abilities, accomplishments, influence and talents, what cannot be disputed is the author’s painstaking accounting of his exploits in excruciating detail. It was exceedingly disturbing to absorb all that was presented as the truth and nothing but the truth.

One major obstacle for this reader was the deluge of name dropping as well the lack of attention to details such as addresses and time frames. Billy Boy is the Sheldon Cooper of the fashion world, or so he believes and tries to convince you.

The second half of the book is devoted to Elsa Schiaparelli who has been the driving force in the author’s life since age 14. Without question, this section is painstakingly annotated, researched, and documented to the point of TMI. It is abundantly clear that the author has spent endless amounts of time delving into the life of this iconic and influential designer, but his efforts come off as showmanship rather than a purveyance of information.

The biographical details come off as rather the author having been in her life rather than reporting on what he found out about her life. It was rather jarring for this reader to feel as if the designer and author were contemporaries rather than being separated by generations. Once again: way way TMI.

Without a doubt, some readers will be engrossed if not absorbed in all that is written in both sections of the book. To some this might be a fashion fairy tale of sorts and to others it might be much less than what they expected. This reviewer is of the latter school of thought based on having reviewed scores of fashion tomes and found so many others that were much more enjoyable and palatable. Frocking Life would have greatly benefitted if it had been more photographically documented as well.