A Friend of Mr. Lincoln: A Novel 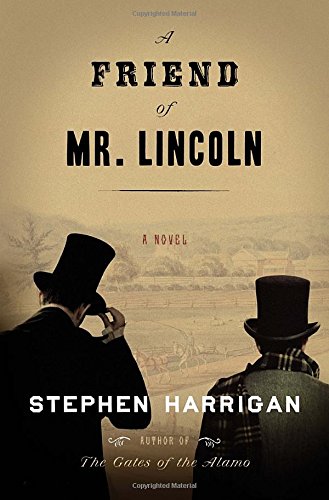 A Friend of Mr. Lincoln is a meticulous, revealing, well-researched, and eloquent presentation of the life of Abraham Lincoln in the years before his presidency. Through a fictional character, Cage Weathersby, we see the president as a young ambitious lawyer riding the Illinois circuit. Through his closest friends, we see Lincoln’s steadfast determination to change American society and his ruthless pursuit of political aims.

Immersed within Lincoln’s closest real friends, including Joshua Speed and William Herndon, a multifaceted, intelligent man is summoned who senses a prodigious destiny and is learning how to achieve that greatness via political manipulation. We meet his archenemy Stephen Douglas, whose collaboration in passing the Thirteenth Amendment shortly before the assassination would become a high point in Lincoln’s political career.

Author Harrigan has delivered an extremely well-researched, well-edited, polished novel that carries the reader into 1830s and 1840s, shortly after Lincoln and fictional protagonist Weathersby fight together in the Black Hawk War. It is a time of vast change for America, fighting Native Americans in the West and quarreling over slavery in the East.

The Western frontier in Illinois during the middle of the 19th century is a hard and inflexible place to live. Broiling hot in the summer and bone-chilling cold in the winter, Illinois presses its people with nature and hardship.

Here, Harrigan introduces a young Mr. Lincoln who already comprehends the difficulty in being an abolitionist in a nation that disparages and degrades the value of human beings because of their color. The author helps us to grasp how and why Lincoln is so politically cautious speaking in public about slavery. Even abolitionists recognized that Americans in 1840 were not yet ready to abolish slavery and that forcing the South to do it would end in a terrible conflagration. Enter Mr. Lincoln, whose heart is abolitionist, but whose head recognizes the need for political expediency and patience.

Although Lincoln is a huge and powerful man, he feels limited by his ungainly physical presence. He is too tall, too thin, and a neophyte with romance. He fights to overcome his rumpled, backwoods appearance and awkward manifestation. Yet his closest companions recognize the greatness in him, and his drive to succeed overpowers all. Through episodic depression and his consistent ability to bring about internecine political conflagration, Lincoln’s friends guide him to safety time and again—including a near miss duel to the death with swords.

Harrigan offers insight into Lincoln’s rocky relationship with Mary Todd before and after their marriage. Lincoln feels intimidated by Mary’s wealthy family, formal education, and swift intellect. She is shrewd and cunning, and she will do everything in her power to control the young socially obdurate politician. Love might never have existed between them. Lincoln is nonetheless drawn to her, and he feels compelled to marry her because of a perceived slight—of his doing—between them. Mary overlooks Lincoln’s wilderness upbringing and lack of formal education, regarding instead the greatness of his intellect and political ambition.

Lincoln is pressed by a feeling of supreme destiny, yet struggles for every election, for every case as a lawyer, and even with his friends and colleagues. Plagued by real or imaginary remorse, Lincoln finds life never easy, and this book exposes his character in painstaking detail. Depression is Lincoln’s companion. He carries it, struggles with it, and at times allows it to control him.

Nothing is more important to young Lincoln than his sense of honor. Harrigan weaves this through the novel as we observe Lincoln’s courtroom presence and his knowledge of the law. He takes cases that befuddle his friends, on every side of every issue, bending his talent and strategy to win each case.

We also witness young Lincoln as a homespun storyteller. Even as a young man, Lincoln had amassed a multitude of tales to fit any circumstance. His use of storytelling in speeches and in the courtroom are magnificent and serve as a glimpse of his future behavior as president.

Lincoln’s journey through young adulthood into middle age is rough strewn, poignant, and at times, sentimental. Harrigan introduces us to Lincoln’s powerful ambition and the warts of his awkward style. He is at times brazen and crude; then at other times he is powerfully erudite and compelling.

If this tremendous novel is lacking in any way, it would be that it could benefit from at least a brief examination of Lincoln’s most famous prior young love, Ann Rutledge, whose untimely death accounted for an immense feature of Lincoln’s character and likely exacerbates his episodic depression. This is strangely ignored, despite its forensic influence upon the rest of Lincoln’s life. The book might also have been enhanced with some pictures, drawings, diagrams, or maps, which greatly assist needy visual learners.

Abraham Lincoln is torn apart and adeptly reconstructed by author Stephen Harrigan. His nobility is fused together with his backwoods charm, his severe adhesion to morality, and his powerful political ambition. Harrigan delivers an insightful envelope into Lincoln’s character development, from roughhousing young man to the astute president preserving the nation. Here we find Lincoln’s profound sense of morality, integrity, and courage. He was at once audacious and contrite, powerful and meek, content and morose.