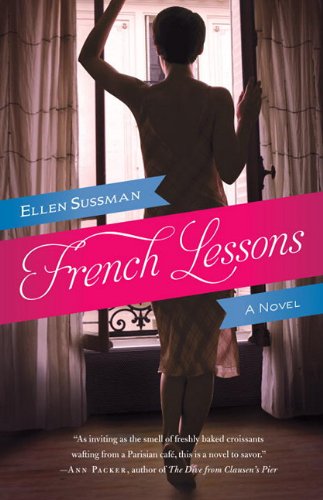 “Ah, Paris. . . . drawn here with deftness and delicacy, from the open-air markets to the multiple bars and cafes—appears to cast a spell . . . Dramatic fiction is all about bad decisions. There are a lot of those going on here. At least they are happening in Paris.”

“We need each other. All of us. We cannot be alone.”

So states bad-boy musician Philippe, a French tutor living the bohemian life in Paris. In this breezy story of a single day-in-the-life, Philippe and two other members of a tutor love triangle are charged with teaching an equally confused trio of Americans the language of Paris.

Which is—of course—the language of love.

The story starts with the other male tutor, handsome, jazz-loving Nico (a poet), who takes on a new student for the day. Josie is a young teacher spending a vacation in Paris that she was supposed to have shared with her married lover. But three weeks earlier, her married lover dies suddenly, and Josie—the secret adulteress—can share her terrible grief with no one.

No one that is, except for Nico, who is instantly smitten by the grieving American, no matter that he’s fresh from a tangled interaction with Philippe and the lovely object of their mutual affection, Chantal (who has slept with both men.) Nico flirts the day away with his sad student, who comes alive under his charm. He promises to run away with her to the south of France that very evening.

Philippe, on the other hand, is saddled with an American mother of two with no linguistic skills but magnificent breasts. He makes some effort to teach her simple nouns, but he soon lures her into his bed. This young mother, overwhelmed by her two children and neglected by her jerk of a husband, tumbles right into adultery. She enjoys the romp so much that she later joins her new lover in a café, carelessly toting along her children.

Finally, Chantal’s student is an attractive older man married to a famous middle-aged actress. The couple has fought the night before, and Jeremy wonders if he wants to kiss Chantal because he just fought with his wife, or because, well, Chantal is young and beautiful, and, hell, this is Paris. Chantal is a sphinx, ever aware of the mutual attraction, while ironically admiring Jeremy for being a happily married man.

These three romantically and sexually charged couples converge at a bridge over the Seine, where Jeremy’s wife is shooting a very French scene from a very French movie. It involves a bed en plein air upon which a naked young nymph stretches languorously. A naked older man circles her, while his wife looks on. It’s Art, and many of the characters are moved by the middle-aged wife’s willingness to gift to her husband a nubile plaything.

Ellen Sussman’s depiction of a very Gallic love can be difficult to embrace. Here, love is blithely indifferent to marital or emotional ties, careless of consequences, brought on by casual flirtation with its primary goal sexual pleasure. Each character is in romantic transition, and Paris—drawn here with deftness and delicacy, from the open-air markets to the multiple bars and cafes—appears to cast a spell over each of them, making them willing to love (or consider loving) the one they are with—regardless of the fact that the one they’re with is married, in love with someone else, or wears shiny shirts and lives in a beer-can-strewn apartment.

Dramatic fiction is all about bad decisions. There are a lot of those going on here. At least they are happening in Paris.