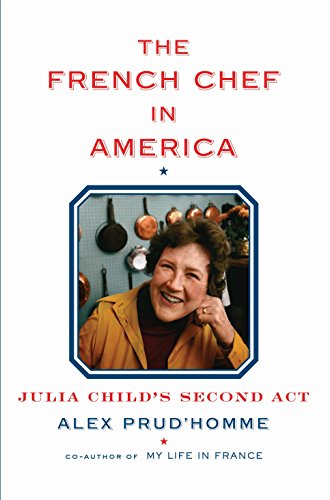 In Jane Kramer’s 2012 New Yorker profile of Israeli-born, London-based chef Yottam Ottolenghi, we learn that Ottolenghi began his culinary odyssey as a home cook working his way through Julia Child’s oeuvre while living in Amsterdam in the 1990s. Such is the long reach and powerful influence of Julia Child on those of us who want to learn to cook.

For so many of us who have been touched or influenced by Julia Child, it is hard to understate how much she meant to us and how much we miss her still. When her memoir, My Life in France—which she wrote together with her grandnephew, Alex Prud’homme—was posthumously published in 2006 it became a bestseller. We were all eager to hear from her one last time.

But My Life in France seemed to end somewhat abruptly with the closing of her beloved home in Provence, La Pitchoune, in 1989. It focused mainly on her early years writing Mastering the Art of French Cooking as well as the development of her first PBS series, The French Chef. Julia Child only told us half the story. It is only natural, then, that Alex Prud’homme would want to finish the story by writing the second half: The French Chef in America.

While there is little that is new in The French Chef in America that hasn’t already been covered (most notably in Bob Spitz’s 2012 biography of Julia Child, Dearie), devoted fans will have another opportunity to lap up the timeless kitchen wisdom of one of the world’s greatest cooking teachers.

“One of Julia’s most endearing traits,” writes Mr. Prud’homme, “was to admit her own mistakes.” For many of us home cooks with more than a few cooking disasters under our belts, this is the enduring legacy of what Julia taught us: Mistakes happen. The key is to learn from them. With so much pressure to turn out food that looks like a magazine spread or something from a cooking show on the Food Network, Julia Child’s message that sometimes things can go wrong allows us all to exhale.

She also modeled hard work. In every endeavor she undertook, Julia worked tirelessly to produce the best possible outcome for her viewers/readers. Julia, in other words, was no phony lapping up the limelight while others did the behind the scenes work. If a recipe didn’t work, she kept at it until it did.

There is a terrific example of this dedication to her audience early on in The French Chef in America when Julia is working on Mastering Volume II from her home in Cambridge, Massachusetts. Mr. Prud’homme describes her working on a recipe for puff pastry which was proving difficult to execute. While her French co-author, Simca, wrote one version for the recipe and moved on, Julia kept refining it and had her editor, Judith Jones, try it out herself while Julia looked on:

“As Judith struggled to knead layers of pastry and butter on the white marble slab, Julia took notes and gently coached from the sidelines. They spent two days reworking the recipe, trying different proportions of flour and butter, and, Jones recalled, ‘It suddenly made sense!’ In a difficult recipe like this one, she said, ‘what you really want to know is what to expect: Why do all these layers? What are you gaining from all that butter and air? Julia was able to step back and give the overall picture, explain why it was worth the effort. Very few writers can do that.’”

You have to wonder how many cookbook writers today display that kind of work ethic. More importantly, it shows how much Julia cared about her readers. She wanted us to succeed—another reason why her legacy has endured.

Whereas the writing of Mastering Volume II gets scant coverage in Child’s memoir, Alex Prud’hommne picks up the narrative in The French Chef in America and gives the full backstory that led to a permanent fissure in the collaboration between Julia Child and co-author Simone “Simca” Beck. (Again, to readers of Dearie, the story is familiar.)

It isn’t until more than halfway through the book that Prud’homme begins to chart Julia’s course post-Mastering Volume II and the second season of The French Chef on PBS which takes us only until 1975. The remainder of the book covers the rest of the story, which feels a bit condensed.

That said, it reflects the changing culinary landscape in America and beyond to which Julia was very much attuned. As America’s culinary curiosity blossomed, so too did Julia’s. She began to turn her attention to American food in both her TV productions and her cookbooks. The French Chef gave way to Julia Child & Company, which had a more distinctly American approach to food. She also began to collaborate with other chefs and the second half of the book covers her TV appearances that arguably launched the television careers of Jacques Pépin and Emeril Lagasse. She was also instrumental in developing the careers of Sara Moulton and Dorie Greenspan.

All of which is to say, that Julia Child enjoyed a long career, inspired many and spawned a growing stable of celebrity chefs with cooking shows. But the most inspirational part of her story is her early years when as an awkward, impossibly tall American with a funny voice she stepped onto the shores of France and reinvented herself through sheer determination and hard work leaving a lasting legacy of what it means to be a good home cook. The rest of her story is mostly a post-script.