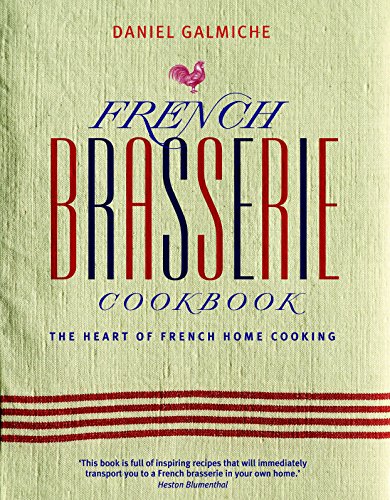 “‘I wanted to create a book that’s not too ‘cheffy’ (the kind only chefs can follow), a straightforward home cookbook that’s fun to read and inspires you to cook some really terrific French food . . .’”

Mr. Galmiche grew up in the region of Franche-Comté, influenced by the cooking of his Great-Aunt Suzanne and the proximity of Burgundy, a region known for superb rustic cuisine. He’s earned four Michelin stars in his tenure at top British restaurants, cooking an exciting version of traditional French brasserie dishes. French Brasserie Cookbook: The Heart of French Home Cooking is his first cookbook.

And lovers of French cooking will find Mr. Galmiche’s French Brasserie Cookbook: The Heart of French Home Cooking a welcome addition to their culinary libraries. Behind the usual recipes—and many of the recipes reflect those found on menus across France—the offerings in this gorgeous, beautifully illustrated book not only inspire fledgling cooks to grab an apron and a mandoline. The recipes provide challenges and surprises for the experienced cook as well. Unlike many cookbooks penned by chefs, Mr. Galmiche’s French Brasserie Cookbook both promises and provides do-able, delicious recipes.

After a brief introduction to the concept of “brasserie,” Mr. Galmiche delves into a short glossary, defining some technical terms used extensively in French cooking. Then comes a chapter on the basics, filled with such essentials as stocks, sauces like hollandaise and vinaigrette, and pastry doughs. The six chapters that follow supply the cook with a wealth of straight-forward recipes and guidelines for creating scrumptious French food without all the fuss inherent in a professional kitchen.

The chapter Appetizers includes various classic soups like fish soup with saffron and lighter, more traditional rendition of onion sup, complete with a cheesy crouton. Tapenade, anchoïade, asparagus with parsley vinaigrette, and terrines round out the rest of the chapter.

Moving on to Meat, Poultry & Game, Mr. Galmiche satisfies the longings of readers yearning to recreate the memorable meals they ate while in France. Steaks and stews, pork in various guises, cassoulet, charcuterie, chicken in red wine, spatchcocked chicken, duck, rabbit, and even game like venison show up in this chapter.

Fish lovers naturally expect some of their favorites in the chapter titled Fish & Shellfish, like Dover sole and salt-crusted sea bass, and Mr. Galmiche doesn’t disappoint. From pan-fried red mullet to bouillabaisse, many of the classics tempt the cook.

Vegetarians generally don’t fare well in France, where there’s never been a real tradition of vegetarianism except that associated with religious heresies. But Mr. Galmiche inserts a Vegetarian Dishes chapter right after the meat and fish sections. Quiches and omelets, crepes and risottos, as well as various tarts, ought to please vegetarian readers.

And all cooks will turn to the following chapter, Side Dishes & Salads, to find many simply prepared dishes using zucchini, green beans, peas, potatoes, and tomatoes.

The final chapter, Desserts, consists of many tarts—including the ubiquitous Tarte Tatin made with apples, as well as Great-Aunt Suzanne’s pound-like cake and various other treats, particularly chocolate mousse and crème brulée.

Directions read smoothly, concisely, and clearly. Some extra fussiness slowed down the finishing of dishes; for instance, in the recipe for the mashed potatoes, the recipe called for boiling the potatoes and then baking them at 400 degrees F for 10 minutes to dry them out. This step might be eliminated, if time is short, but the resulting mashed potatoes tasted creamier and smoother than the usual fare.

Perhaps the words of the chef himself will suffice to sum up the nature of this excellent cookbook:

“In this book, you will find some lovely, uncomplicated recipes that come from all over France. Some are traditional with a twist (for example, I have made them lighter or more-up-to-date); others are specialties from particular regions but made my way. . . . Hopefully, once you’ve tried them, you will make them again and again. I wanted to create a book that’s not too ‘cheffy’ (the kind only chefs can follow), a straightforward home cookbook that’s fun to read and inspires you to cook some really terrific French food . . .”

In French Brasserie Cookbook: The Heart of French Home Cooking, Daniel Galmiche has certainly succeeded in making French cooking accessible to cooks of all skill levels.