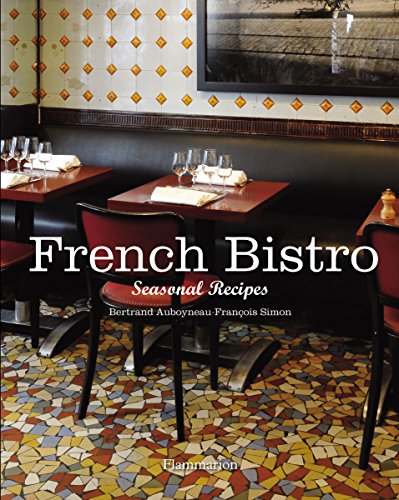 “A visual feast as well as a gastronomic one . . . Organized by ten essentials that any successful bistro must have, French Bistro almost reads like a graphic novel, thanks to the prolific number of colorful photographs.”

When you walk into a Paris bistro straight off the street on a cool fall day, the odd leaf rustling at your feet as you cross the threshold, you expect something almost magical to happen, don’t you? And, according to the authors of yet another book on French cuisine, that’s exactly the feeling you are entitled to, one that bistro owners—if they’re any good at what they do—want you to experience.

A visual feast as well as a gastronomic one, French Bistro: Seasonal Recipes first appeared in France in late 2011 under the title Bistrot and captures the essence of what a French bistro ought to be.

“Bistro” generally signifies a small, rather informal restaurant that serves more rustic or regional food than do grander haute cuisine establishments. The authors—Mr. Auboyneau, owner of the successful Parisian bistro, the Paul Bert, and Mr. Simon, food critic for a Parisian newspaper, Le Figaro—set out to dissect the so-called “bistronomy movement” and examine just what makes a successful bistro. They feature 13 of the most emblematic bistros in Paris, including Auboyneau’s own bistro, the Paul Bert.

Organized by ten essentials that any successful bistro must have, French Bistro almost reads like a graphic novel, thanks to the prolific number of colorful photographs.

Similar to a recipe, the bistro calls for specific ingredients and each section of the book covers those ingredients: The Owner, The Chef, The Chalkboard Menu, The Wine, The Servers, The Table, The Décor, The Clients, The Ambience, and The Aromas. As you move through the book, the authors introduce to you several stellar Parisian bistros. You meet their owners and get a taste of what it would be like to eat in those establishments.

Not surprisingly, then, food is not always the most important aspect of a bistro, although it obviously is the reason for the whole drama in the first place. And speaking of drama, Mr. Simon writes the short vignettes in each section using metaphors of the stage production.

One of the most interesting of these short sketches deals with The Clients. In some Parisian bistros, the owner or maitre d’ will seat American tourists and French people in separate parts of the bistro. Since people tend to be “unpredictable beings,” every bistro owner stays on the lookout for the “type” likely to ruin the calm ambiance of everyone else’s meal.

As Mr. Simon writes, “The success of an evening at a bistro can often hinge on a single client. A grumpy person who complains nonstop can easily spread his mood to neighboring tables.” But on the flip side, the traveler, happy to be dining in their first French bistro, is welcome. “When they arrive, the world feels right again: the bistro is no longer a refuge for crosspatches but once again fulfills its vocation of a welcoming inn.”

But what about the recipes? Are these bistro favorites within the reach of the average home cook? A glance at the recipe index—featuring over 50 recipes—shows a wide gamut of dishes, ranging from Porcini Omelet and Fried Eggs with Black Truffles to Homestyle White Asparagus to Green Bean Salad with Aged Parmesan to Sole Meuniere with Lemon-Buttered Steamed Potatoes and My Grandmother’s Chocolate Cake. Many of the recipes call for ingredients not readily available to American home cooks: suckling pigs, blood sausage, beef cheeks, and roasted pigeon.

Nevertheless, French Bistro: Seasonal Recipes shares secrets about some of the all-time bistro standbys like Entrecôte with Béarnaise Sauce and French Fries, as well as Chocolate Soufflé and Tarte Tatin (upside-down apple tart).

Lush with heart-stoppingly glorious photos of bistro interiors, exteriors, and food, French Bistro: Seasonal Recipes is fun to read and to cook from. Yet it is far more than another mere cookbook loaded with French recipes. French Bistro: Seasonal Recipes also provides English-speaking readers with the requisite tools to judge a bistro and determine its potential value as a place to eat. And nothing is more necessary than a toothsome and relaxed meal after a long day hoofing it through Notre Dame and the Louvre, fighting the crowds that seem to engulf Paris more and more every day.