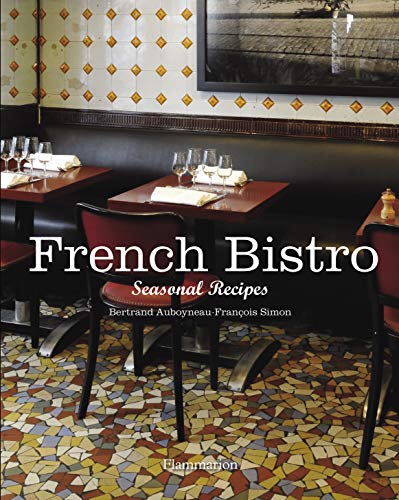 “. . . French Bistro is a book worth owning. Not only is it an excellent guide for mapping out your next culinary adventure in Paris, but it is also a mouth-watering delight that will lift your spirits as surely as a plate of Sole Meunière with Lemon-Buttered Steamed Potatoes at the Paul Bert.”

Bistros are where many young French chefs are making their marks these days. Forgoing Michelin-star restaurants, chefs and diners alike are opting for food that is more relaxed and authentic. As a result, the “bistronomy” craze has taken Paris by storm. Like the Eiffel Tower, the baguette, and the beret, the Paris bistro has become a French icon.

The bistro is in a dining category all by itself: It is not a restaurant with a fixed menu and a star chef nor is it a brasserie, a casual dining establishment that also has a rigid menu and no star chef. A bistro is a small (often cramped) place whose character is defined first and foremost by its owner who is not the chef and offers a continuously changing menu displayed on a chalkboard based on seasonal ingredients.

French Bistro is a celebration of this genre, which has enjoyed a resurgence in Paris over the last two decades thanks to the late Michel Picquart who was considered at the forefront of the modern bistro.

It was Picquart who introduced the set menu (starter-main course-dessert) at his bistro, Le Villaret, back in the 1980s and set the standards for the kind of cozy, welcoming, seasonal dining experience that defines a good bistro today.

The coauthor, Bertrand Auboyneau, is the owner of the Paul Bert, a celebrated bistro in the 11th arrondissement. Presumably, the book was largely written by François Simon—a food writer as well as a food critic for Le Figaro—who expertly channels M. Auboyneau’s voice throughout.

French Bistro: Seasonal Recipes is unabashedly self-promoting in the most charmingly Gallic way. Sometimes you get the feeling that you are being instructed in a let-me-explain-to you-foreigners-how-we-French-do-things kind of way until you stop and realize that the book was first published in France. The authors are educating the French on the finer points of bistro culture as much as us foreigners.

And there is much to know, apparently. This is a book that deconstructs the French bistro into ten essentials: the owner, the chef, the chalkboard menu, the wine, the servers, the table, the décor, the clients, the ambiance, and the aromas.

Between the pages of French Bistro you will learn all you need to know about what makes one bistro good and another an also-ran. But just in case you doubt your ability to suss out a good bistro yourself, M. Auboyneau features fourteen Parisian bistros worth your time and money, starting with, of course, the Paul Bert.

One of the most interesting revelations in the book is that apparently in a bistro the customer is boss: “The work of the owner and his team involves putting each and every client at ease, reassuring them, tucking them in. You want another seat, chair or napkin? You would like to change your side dish and have new salt-and-pepper shakers brought to the table? No problem. Anything is possible.” (Except, that is, a well-done steak—get over it.)

And if you happen to be a tourist, it matters not: “[Many clients] come from far-flung places. They have dropped their bags off at their hotel and have come to pay homage to their first Parisian bistro. When they arrive, the world feels right again: the bistro is no longer a refuge for [curmudgeons], but once again fulfills its vocation of a welcoming inn.” Fear not, my fellow Americans, you will not get the surly French waiter treatment in a bistro!

Part dining guide, part cookbook, part coffee table book, French Bistro is a must-have for any Franco foodie who can’t wait to get back to Paris. But don’t just look at the photos (which are by themselves worth the price of the book), read it. The book is positively chockfull of fun facts and clues about what to look for in an authentic bistro including the right chairs, napkins, cutlery, and salt (it must have “attitude”!).

What you are not likely to do, however, is use this as a cookbook. The translation of the book is generally so good that you will be lulled into thinking it was written just for us foreigners. But as soon as you start reading the recipes, you will quickly come to the realization that, in fact, they are not intended for you.

There is very little we would be able to source (or be inclined to cook) like Suckling–Pig Head Cheese or Duck Foie Gras Marbled with Leeks. Occasionally, though, you might run across something you will be tempted to make like Entrecôte with Bérnaise Sauce and French Fries (a classic bistro dish).

Alas, though, you are not French and the directions are not written for you. After listing the ingredients, the author writes, “I’m confident that with your culinary talents, you are more than capable of cooking the entrecôtes and making the French fries.” (Gee, thanks!)

Regardless, French Bistro is a book worth owning. Not only is it an excellent guide for mapping out your next culinary adventure in Paris, but it is also a mouth-watering delight that will lift your spirits as surely as a plate of Sole Meunière with Lemon-Buttered Steamed Potatoes at the Paul Bert.